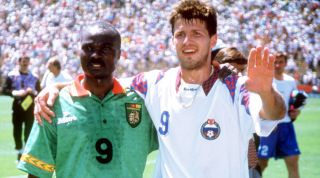 Just how did you manage to score five goals in one match?

Well, I think it helped that we played Cameroon. They were a good team in 1990, but in those days African teams could still be a little crazy with their tactics. As soon as they went a goal down they started to chase the game and rush forward in great numbers. That’s what happened when we played Cameroon in 1994. We went a goal up and Cameroon started to chase the game. That meant the game really opened up and it created more scoring opportunities for us.

I scored the first goal on 15 minutes and before half-time I had a hat-trick. When Roger Milla scored at the start of the first half, Cameroon thought they could mount a comeback and again they charged forward. African football is dominated by emotion – they aren’t like the Italians – so when Cameroon started to charge forward again we punished them.

How disappointing was it to score five goals and still get knocked out?

We were incredibly unlucky that year. Our group had Brazil, who went on to win the tournament, and Sweden, who finished third. We lost both those matches but if we had progressed to the knockout stages I think we would have done well. It was essentially the same side that played for the Soviet Union in the early-'90s. We had Russians, Ukrainians and Georgians in the team – it was a great team.

You shared the Golden Boot with Hristo Stoichkov – that must make you feel proud...

How often do you get reminded about those five goals?

Every day. That’s the great thing about the World Cup – the whole world is watching, and if you do something spectacular you'll be remembered forever. I do a lot of travelling throughout Europe and the US, and I still get people coming up to me. When I scored those five goals it didn’t feel like I was making history because when you’re playing, you always think there are better things around the corner.

But after the World Cup your international career didn’t go so well. Why?

The team’s new manager Oleg Romantsev didn’t like the fact that I had a bigger reputation than him. He preferred players that he knew, so he gradually started to drop me. And when Boris Ignatyev took over in 1996 I was having injury problems.