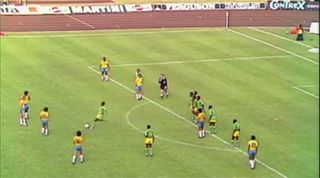 One Southeast Asian nation has qualified for the World Cup.... technically.

Before their independence from the Netherlands, the Dutch East Indies (present day Indonesia) featured at the 1938 World Cup in France and became the first Asian nation to do so.

But their qualification was almost a gift, with one designated place in Asia contested by two teams (Japan later withdrew). It was little surprise, then, that the Dutch East Indies lost 6-0 in their first game to Hungary and were eliminated.

Indonesia were suspended from international football in 2015 – a ban which was later lifted – but that ruled them out of the 2018 World Cup qualifiers.

They only made one appearance at football's biggest tournament, in 1974, but Zaire (present day DR Congo) produced one of the most bizarre moments the World Cup has ever seen.

Their campaign began with a 2-0 loss to Scotland, before a 9-0 humilation in the hands of Yugoslavia.

In their final game with Brazil, the already-eliminated African side were down 2-0 and the Brazilians had a free-kick to extend their lead. A Zaire defender (seemingly unaware of the rules) dashed out from the wall, booted the ball upfield and was booked for his troubles.

The team were allegedly told by the country's dictator Mobutu Sese Seko that they couldn't return home if they lost by more than four goals.

Brazil still went on score, but Zaire could stil return home, having 'only' lost 3-0.

On the bright side, DR Congo can still qualify for their second World Cup in 2018, if they win their final group game and group leaders Tunisia lose.

The Canadians made their sole World Cup appearance in 1986, after beating Honduras 2-1 in the qualification stages.

Not only did they qualify, but the Canucks rubbed salt into the wounds of neighbours United States, who'd failed to make the cut for the tournament.

It wasn't all sunshine and rainbows, mind: Canada failed to score and lost all three of their games in Mexico, although a dogged performance in a 1-0 loss to Michel Platini's France was an admirable achievement.

They were knocked out in the second round of 2018 World Cup qualification.

Haiti succeeded where the other four countries in this list failed, scoring not one but two goals at World Cup '74.

It didn't stop them from being eliminated, however, as they lost all three of their group games against tough opponents in Hungary, Italy and Argentina.

But their moment in the spotlight came against Italy, when striker Emmanuel Sanon beat one of the greatest goalkeepers in the world, Dino Zoff, to put the unfancied minnows ahead.

While Italy went on to win the game 3-1, the goal remains a legendary one even beyond Sanon's death in 2008.

Haiti were knocked out in the fourth round of CONCACAF 2018 World Cup qualifying, finishing third in their tough four-team group behind Panama and Costa Rica.

As far as heads of football associations go, Uday Hussein – son of Sadaam – has to be the worst of the lot.

Uday took charge of Iraq's football association in 1985 and was known to threaten, torture and beat players if results didn't go their way.

But it was also under his reign that the Iraqi team accomplished their greatest achievement to this day: qualifying for the 1986 World Cup in Mexico.

But that was as good as it got – Iraq lost all three of their games, scoring one goal in a 2-1 loss to Belgium.

They were knocked out in the third round of qualification for the 2018 World Cup.

FOURFOURTWO USA VIEW How did this happen? Behold, the most embarrassing day in U.S. Soccer history