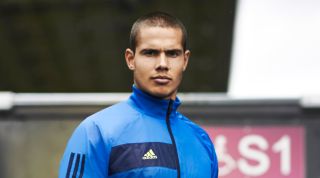 Jack Rodwell will face a familiar foe if he steps onto the Etihad Stadium pitch on Sunday.

They won’t be eyeing him up from the opposite half, however, but the touchline, where his former mentor now resides in Manchester United colours.

It was David Moyes who handed a 16-year-old Rodwell his Everton debut against AZ Alkmaar in December 2007, and Moyes who nurtured him along the path to established Premier League and international recognition.

But there’ll be no pleasantries when the duo meet in the blue half of Manchester this weekend. While Rodwell’s admiration for his former boss is clear, the 22-year-old would love nothing more than a victory to pile pressure on the Scot of whom so much is expected this season.

“It wasn't a surprise to see him take over at Manchester United,” the midfielder tells FourFourTwo. “Everyone’s touted him to be the new manager for a while, but it was surprising that it happened so soon.

“I don’t know exactly how much time he’ll be given, but hopefully it’s enough. He’s similar to Sir Alex Ferguson and he’s a great manager. Their squad is good, and from my experiences of working with him he’ll do well for them.

“But from our point of view, I hope he won’t be too successful.”

Rodwell knows all too well of full-blooded derby atmospheres – he was sent off, harshly, for Everton against Liverpool in 2011 – but this would be an altogether new experience for the young midfielder.

Injuries last season means this could be Rodwell’s first-ever Manchester derby, and the England man is relishing the chance to dent United’s title charge in this early-season tussle.

“Derby games are always amazing,” he says. “I managed to play in a couple while I was at Everton, but I’ve not played in the Manchester derby yet so I’m really excited.

“They’re the best games in the season for me, and the best for the fans too. That it would help with our push for title makes it even bigger.

“Manchester United are the team to beat this season. Chelsea are up there as well, and there might be a surprise team - Tottenham have a good squad - but I think if we can do well in the derby games that will really help us.”

Rodwell has made just the one appearance so far this season, in last weekend’s goalless draw at Stoke, after remaining on the bench in City’s midweek Champions League win at Viktoria Plzen.

Manuel Pellegrini’s free-spenders are expected to advance past the group stage for the first time in three attempts, and Rodwell admits the squad are under no illusions of their task ahead after their previous failures.

“It's important we do better because the last couple of years haven’t been great in the Champions League for us,” he concedes.

“It’s important for us to kick on now and do well not only in England, but also on the European and world stage. A good season in Europe is exactly what we need.

“We had high hopes for the league and Champions League last season, and we didn’t meet our expectations. To go out in the group stage was hard for us, and hard for the fans, but that disappointment will only spur us on to do better this year.

“With the squad we had last year we should have done better, but we’ve made some good additions and now it’s even stronger.”