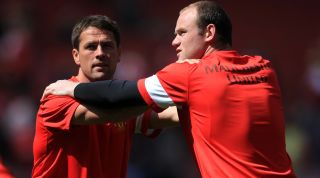 Michael Owen remembers ruefully what it was like when time eventually caught up with one of the finest forwards of a generation. Soon it could happen to Wayne Rooney too, he concedes. But right now Owen thinks his former England strike partner is suffering from a rather different problem.

Yes, Rooney has scored only three goals in 16 Premier League appearances this season. Yes, the Manchester United striker has been described as a 30-year-old in a 35-year-old's body by Jamie Carragher.

But Owen is yet to be convinced that Rooney's days as one of the Premier League's most prolific strikers are over, as Manchester United prepare to travel to Newcastle tonight.

"Any striker in the world would find it difficult to score lots and lots of goals in this Manchester United team at the moment," the BT Sport pundit tells FourFourTwo, ahead of the clash of two of his former clubs.

"There are just not enough chances being created. You can blame strikers, you can say Wayne Rooney and Anthony Martial aren't firing on all cylinders, but you're only as good as the chances you're given.

"If a striker came out and had a moan in this situation, people would say they'd give anything to be a striker at Manchester United, with all this talent around you creating chances. But the simple fact is that they're not.

"If that's not happening then it's very difficult as a striker. You're so reliant on other people."

Too much too young

Owen knows the telltale signs of advancing age, of a bright star beginning to fade. He went through it all himself, from teenage prodigy to England great – then eventually to the realisation that his best days were gone. He retired three years ago, at the age of 33.

Is Carragher right, at least to some extent? Will the fact that Rooney burst onto the scene so young – even younger than Owen, in fact – now impact on the United forward in his early 30s?

"I think it will do," says Owen, who made his Liverpool debut at 17 and his England debut a year later. Rooney's Everton debut came at 16, his England bow at 17. "It's accentuated even more as a centre forward," Owen insists. "When you just lose a fraction of speed or something in your head, whatever it might be, it shows because that's what you're relying on at the sharp end.

"I've been through the process, of feeling like you're a yard slower. It is frustrating. Even now I play five-a-side and my mind still tells me what I've always been computed to do, what I've always been able to do. But now your legs move that fraction slower, which means that your judgement's off.

"You tend to change your game a little bit if you don't feel you can hurt teams in certain ways. You drop off a little bit, link play a little bit more and you go away from what you were good at. That's certainly what I did in my career."

If Louis van Gaal has bore the brunt of supporters' frustrations in recent times, Rooney has not escaped entirely on social media. Is Owen surprised that a man who became England's leading goalscorer of all time only four months ago gets so much criticism online?

"Not really because I think we've all been in that boat!" he laughs. "It's very difficult for Wayne at the moment. He's not going to be getting any better now, he's only going to deteriorate with age.

"Whether that deterioration has started or not is open to debate. Some people will say it has, some will ask how you can say that when he's playing in this type of team at the moment.

"It's hard to say he's really out of form or he's really in form. He's scored a few goals, he scored a penalty the other day in the FA Cup against Sheffield United, which was really important. He's trying as hard as ever, it's just not quite happening for a combination of reasons. The way they're playing is not conducive to scoring multiple goals and we're seeing that week in, week out."

Owen believes that Rooney could eventually prolong his career by moving into midfield – but not just yet.

"Every player changes a little bit and he will do that eventually," Owen says. "It's just a question of when is that time.

"Ryan Giggs used to fly down the left wing, then at the end of his career he was more of a central player, a passer of the ball rather than bursting past people. Paul Scholes used to go from box to box, scoring goals by the dozen, then he ended up being like a quarterback.

"I'm sure Wayne could go back into central midfield and play for another few years. He's got the football brain to do that. He's got an array of passing, he can tackle, he can do a lot of things. You'd think his career would last a lot longer because of that.

"But I still think he's got plenty to offer as a centre forward. I wouldn't say his time there is over yet. It's inevitable that at some point it will be, but he still knows where the back of the net is.

"I'd be reluctant to judge him without seeing him playing in a team that is full of confidence and creating chances."

United face a Newcastle side who have lost their last four matches 1-0, but remain only two points from safety after improving from their nightmare start to the season.

"I think Newcastle's chances of staying up are good, there are definitely three worse teams in the league," Owen says. "When I look at the team on paper, they're a stronger team than they were in the last couple of seasons. The squad looks a bit bigger and I think Steve McClaren is starting to get a tune out of his players.

"This will be a tough game for Manchester United, I can see Newcastle getting something out of it.

"Manchester United are struggling for confidence, struggling for goals. The players are probably not looking forward to playing as much as they normally would because it's really rigid. They're almost playing with their arms tied behind their backs.

"It's not what Manchester United are used to."

Watch Newcastle vs Manchester United in the Barclays Premier League live and exclusive on BT Sport 1 from 7pm on Tuesday, January 12. Visit btsport.com for more info