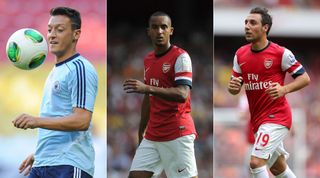 It’s no wonder the sale of Mesut Özil has made Cristiano Ronaldo angry.

During their time together at Real Madrid, Özil provided 27 assists for the prolific forward alone in a duet that quickly developed into one of world football’s most effective.

As well as being the single-greatest provider of Ronaldo’s career, Özil also created a further 41 assists for Los Blancos in all competitions - that’s 68 in total - after his transfer from Werder Bremen in 2010. In that three-year spell, the only player across Europe’s top five divisions to match his 47 league assists was Lionel Messi.

Perhaps that’s why, according to AS, Ronaldo is reported to have told his Portugal team-mates of his disgust at the transfer. Gareth Bale’s recent arrival, along with the precarious political situation at the Bernabeu, means the once-untouchable Portuguese star has much to lose in criticising the club - but it's a recklessness that demonstrates his strength of feeling over Özil’s departure.

Arsene Wenger won’t be losing any sleep, though – and neither will Theo Walcott. The England man publically stated his desire to become Arsenal’s main striker (for the zillionth time) after Robin van Persie’s title-winning transfer to Manchester United last summer, and by the end of the campaign had evidence to back up his ambition. He finished the year as the club’s top scorer with 14 goals in 32 league games (21 in 43 across all competitions).

It’s not quite the strike rate worthy of a trophy-hunting side’s main striker, but Walcott’s promise as a consistent finisher has improved considerably. However, with Oliver Giroud growing into his role as Arsenal’s main man after a transitional first season at the Emirates, Walcott may need to find a way of continuing his development from the flanks.

The former Southampton man is, of course, very different to Ronaldo – not least in terms of ability and physique – but Özil may well find similar joy in creating opportunities for his new colleague. In fact, Walcott’s pace down the channels and on the break could be the ideal outlet for the German’s vision and craft. Could it be that another famous relationship is about to be formed between Özil and a jet-heeled goalscorer?

He’s at his most dangerous when allowed to ghost between defensive lines from wide (the graphic below shows how rarely Walcott receives the ball centrally) or bursting past his marker when given the room to accelerate - and it’s this sort of movement Özil can thrive upon in North London.

While Arsenal have been able to wreak havoc against weaker teams, long-suffering Gooners will be hoping their new playmaker can produce against larger foes too. Strangely, considering their reputation as the Premier League’s artistic types, creativity has become a problem for Arsenal against competitive rivals. An injection of ideas may have been more necessary than many had assumed before the summer.

Yet Özil’s arrival needn’t be a personal disaster for Santi Cazorla, who himself arrived in London as Arsenal’s inspirational summer signing – albeit on a lower level – last year. There'll be room for both in Arsene Wenger’s favoured system based on their tendencies to wander wide.

Cazorla is prone to drifting left and deeper into midfield, while his new team-mate usually favours the right flank when roaming. And rather than replace Cazorla, Özil may well enhance the Spaniard’s effectiveness by allowing the former Malaga midfielder to become more involved in build-up play. The creative burden can be shared – and that’s good news for the 28-year-old.

With Özil able to float about the final third, the busy Cazorla can support the forward surges of Jack Wilshere, as well as link play from deep. This potential dovetailing of duties will, in turn, create space for more opportunities and threatening late runs into the box to slice through defences.

It’s all music to the ears of Giroud too, who has looked far more assured in front of goal this season at the head of Arsenal’s forward line. With a sharp Walcott preoccupying defenders and the unnerving presence of Özil and Cazorla roaming and probing, the Frenchman will surely capitalise on the additional goal fodder coming his way.

Having ultimately swapped Gervinho for Özil this summer, Arsenal fans can be forgiven for thinking their record signing signals a markedly exciting change of direction. The supporting cast of Lukas Podolski, Alex Oxlade-Chamberlain and Tomas Rosicky will also allow Wenger to rotate, keeping players fresh and ensuring the inspiration doesn’t dry up.

It’ll take more than one impressive transfer to mount a serious Arsenal title challenge, but the ambition alone has already worked wonders for the club's relationship with its fans. While Saturday’s match against Sunderland is only the first of many games for Özil to showcase his talents, over the course of a season it'll be intriguing to see how his team-mates - namely Walcott and Cazorla - take advantage of his presence.