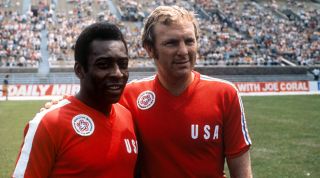 “It’s hard to say. You see, whoever I played against I had the best defender marking me, but the best were Bobby Moore and Franz Beckenbauer. Beckenbauer was fantastic – very intelligent, very tough to beat. And Bob was the best centre-back I’ve seen – so quick up here [points to his head].”

“You know, I scored a lot of good goals. A lot of headed goals, a lot of bicycle kicks, a lot of goals with a dribble. So people say, ‘Why was Pele’s 1000th goal a penalty?’

"Then a famous journalist in Brazil wrote: ‘God said the world has to stop and see this goal – that’s why it was a penalty kick.’ So I like to say it was God’s decision, and also God’s decision where I scored the goal, in the Maracana.

"There's a story that I played in goal the week before so I could score the 1,000th goal in the Maracana, but it was just coincidence. At the beginning of my career I played as a reserve goalkeeper, both for the Brazil national team and for Santos, because you could not replace the goalkeeper if he had a red card or an injury.

"You had to choose one outfield player who could also play in goal. So I used to train as a goalkeeper, and I was good. Then one game before I scored my 1,000th goal, we go to play in the north of Brazil and our goalkeeper got an injury. I went in goal.

The moment people ask me about most

“Even today, all over the world, wherever I go, they show the save of Gordon Banks when I headed it in 1970.

"Against Italy, I scored a good header, but against England, Banks saved. I’ll never forget it, because nobody will let me!

"Am I happy to be part of history in that way? No, I want to score! I always want to score. Maybe now, I am not so upset about it, but I would never be happy not to score.”

“That I invented the bicycle kick. In Brazil long before me there was Leonidas, who was the first to use the bicycle. When I was young, I practised it and became good but it wasn’t rare. In Brazil, all the kids were trying it when I was young.”

“I’ve played with and against so many excellent players in my career that it’s hard to choose one. Some of the best didn’t even get to play in the World Cup, unfortunately: Alfredo Di Stefano, for example, who was an excellent player.

"We also had Cruyff, Puskas, Zico, Bob Charlton, George [Best]... there have been a lot.”

“God gave me three. I always wanted to say goodbye as a champion and in that way, I have luck.

"When I came back in 1970, I knew it would be my last World Cup. With Santos it was the same. In my last year, ’74, Santos won and I was the top scorer in the league. Then, I was in New York for three years and I knew ’77 would be my last season.

"So I said: ‘Oh God, I can't leave here without being a champion – we must win this tournament.’ These were the best moments.”

This feature originally appeared in the November 2010 issue of FourFourTwo magazine. Subscribe!