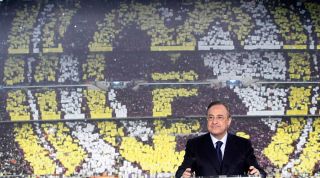 LLL has developed a weird obsession with home renovation shows, despite their format tending to be the same each episode: happy couple buys cheap-but-rundown hovel expecting a swift transformation to soft focus-filmed dream home. Once evidence of a roof fire, termites and lead pipes are uncovered, nervous breakdowns are usually the norm.

Florentino Pérez is in construction by profession and has a certain logic to his thought processes when it comes to football: “If I do this, this and this, then the result will be this.” Indeed, it's a philosophy that works perfectly well for bridges and whatnot, but has failed to bring results over the engineer's two tenures at the Bernabeu.

Over the summer the Real Madrid president decided to take a hefty sledgehammer to his house, and inadvertedly knocked out a few supporting walls when only a bit of re-tiling and a lick of paint was required. Ideally, only the arrival of Carlo Ancelotti and another striker to replace the want-away Gonzalo Higuaín was on the club’s to-do list over the summer.

Instead, Real Madrid are now trying to learn to play without Mesut Özil, have an ever-revolving mess in central midfield, an unfit Gareth Bale being crowbarred into the team far too early, and a back four that appears to have been glued to the pitch ahead of each match.

There's also the matter of Karim “Scapegoat” Benzema, who's currently under the cosh from his own fans and even Pepe, for his ongoing lack of goals and somewhat lackadaisical approach to football. AS editor Alfredo Relaño puts the blame for Benzema’s issues firmly in the hands of the club president for being too supportive of his dauphin. “Benzema has the protection of Florentino and he knows it,” writes Relaño, on supporters’ calls for novice Alvaro Morata to lead the line against Copenhagen in Wednesday’s Champions League clash.

Marca, meanwhile, have pretty much given up trying to work out what's going on, with Monday’s headline after the horror weekend against Atlético Madrid simply asking: “Where do we start, Carlo?”

The inside pages detailed the "100-day crisis" of the Italian manager – a fairly lengthy list of problems mainly detailing the team's lack of of strategy. They are, apparently, a team that neither controls possession, nor hits teams on the counter-attack. Although José Mourinho’s Madrid couldn’t give two hoots for the first four months of the competition, at least there was some kind of strategy involved.

Once again, though, Monday’s AS points the finger of ‘j’accuse’ at Pérez, implying the club president is pulling his own way by insisting his favourites and new signings play, despite what Ancelotti may want. “The excitement is draining away,” warns Relaño, “because the side is missing players who shouldn’t have left and because the coach is indecisive, caught between the whims of Florentino Pérez - numerous and ever-changing - the fans’ preferences, his Italian impulses and the egos in the squad.”

Although a Real Madrid crisis comes around every two or three months, a reconstruction cowboy job from the club’s big cheese is one of the big blame targets in the club’s latest time of trouble. And that's normally a very bad sign for the immediate future of Real Madrid’s manager. Ancelotti needs to complete Florentino’s botched makeover sooner rather than later.