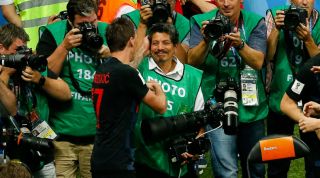 Following the mass pile-up, the 53-year-old from El Salvador even got a kiss from renowned hardman Domagoj Vida

Cortez didn't seem to mind getting crushed too much, but the Croatia National Tourist Board (HTZ) have decided to invite him and his family to the Balkan nation for a holiday anyway. He has accepted the kind gesture and is expected to arrive in late August/early September.

HTZ Director Kristjan Stanicic said: "Almost every major international competition is marked by an interesting anecdote. What marked this World Cup was the celebration of Croatian footballers in the midst of which Yuri found himself accidentally, [and he] recorded it all with his camera making the most original, most accurate and surely one of the most impressive photos of the World Cup.

"The celebration photos have come to the attention of the whole world, who, in addition to the fiery celebration, saw the courtesy of our players. Croatia is a beautiful country of warm and friendly hosts, and we are happy that Yuri accepted our invitation and he will have the opportunity to personally witness that."

A chuffed Cortez replied: "This kind of offer you do not refuse. It will be my honour to come to Croatia. After the match, I feel connected with your country and I was supporting you in the World Cup final."