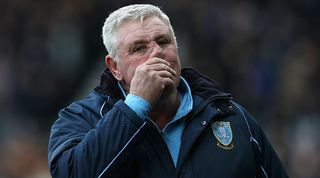 If reports are to be believed, Steve Bruce has slapped down his resignation at Sheffield Wednesday in order to become the new A̶s̶h̶l̶e̶y̶ ̶s̶a̶p̶ manager of Newcastle United.

It’s contractually obliged for prodigal sons to return on Tyneside, so this is nothing new for Magpies who’ve seen the likes of Sir Bobby, Wor Al and King Kev come and go over the last two decades. Except for the fact that it’s Steve Bruce, that is.

The down-on-his-luck crime writer has spent only a few months at Sheffield Wednesday and got a cabbage chucked at him in his last job, so the punishment glutton has naturally decided that the time is nigh to join a penny-pinching Toon side that start the season as sixth-favourites for relegation.

Bruce has been here before, though – much like the other 49 Englishmen below who’ve managed the most Premier League matches. Can you name them all? We suspect not, but give it a bash anyway – 10 minutes are on the clock.

When you’re done, tell us @FourFourTwo and we’ll retweet your scores so long as you don’t give away answers. Good luck! You’ll need it…

QUIZ How many of Barcelona’s 50 biggest transfers can you name?