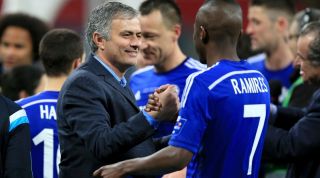 Ramires joined Chelsea in 2010 when Carlo Ancelotti was manager and was still part of the Blues squad when Jose Mourinho returned to Stamford Bridge in 2013.

The Special One’s first season back at Chelsea was, according to Mourinho, one of transition, but the Blues still finished third in the Premier League and reached the Champions League semi-finals.

But Ramires has told the March 2020 issue of FourFourTwo that it was the semi-final defeat to Atletico Madrid in 2014 where the tide began to turn for Mourinho.

After drawing the first-leg 0-0 in Madrid, Chelsea had to win at home against Diego Simeone’s side to reach the final.

They took the lead through former Atleti man Fernando Torres just before half-time, but three second half-goals from Adrian Lopez, Diego Costa and Arda Turan sent the Spanish side through to the final.

After the game, Mourinho publicly criticised star man Eden Hazard, who fell asleep whilst marking the attacking Juanfran, and the full-back squared for Adrian who fired home.

Mourinho branded Hazard as not being ‘mentally ready’ to do his defensive work and blamed the Belgian for things going wrong for Chelsea that day.

Ramires told FourFourTwo: “That had a big impact because he started to lose control of the squad,” admits Ramires. “It’s one thing to say something internally, but it’s totally different to criticise someone publicly.

“Hazard was our main player, and what he did affected Eden’s game.

“Hazard used to collect the ball and attack the opposition. He started to pass the ball much more, and we missed our main attacking threat.”

While Chelsea won the Premier League the following season, Ramires added that the ill-feeling from the Atletico defeat the season before still remained in the air amongst the Chelsea players.

The Brazilian midfielder said that other players began to jump on the anti-Mourinho bandwagon which came to a head in the 2015/16 in the season the Portuguese manager was sacked.

Ramires added: “The atmosphere became really heavy. There were guys who were already angry because they weren’t playing.

“When something like that happened with Hazard, those who weren’t playing had another ally against the manager.

“It became a snowball that only got bigger. It reached a stage where nothing would improve.”

Read the full profile of Jose Mourinho in the March 2020 issue of FourFourTwo magazine, out in shops and available digitally now – and available to order online. Our new magazine features the full story of Jose Mourinho's quest for a third Champions League title, an in-depth profile of African Player of the Year Sadio Mané plus more exclusive interviews with Mateo Kovacic, Andres Iniesta, Rio Ferdinand, Benjamin Mendy, Peter Reid, Djibril Cisse and many more. We also find out the greatest ever European Cup losers, visit the Indian Ocean club competing in the Coupe de France, and debunk football's greatest myths.