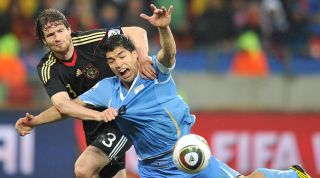 The inaugural World Cup in 1930 didn’t feature a third-place play-off, but the fixture was added to the schedule four years later when FIFA, in their infinite wisdom, decided that what the two beaten semi-finalists really needed was another 90 minutes of football (plus extra time and penalties if required), rather than the first flight home followed by a two-week break in the Bahamas.

In all but one of the 19 completed editions of the World Cup staged since then (1950 being the exception), a pair of heartbroken, mentally drained and physically knackered teams have been forced to slug it out for the dubious prize of a bronze medal just days after falling at the penultimate hurdle. England went through one themselves when they lost 2-1 to hosts Italy in 1990.

Thankfully, though, third-place play-offs are often entertaining affairs, probably because both sides want to go out on a high and are less concerned than normal with all that boring stuff like structure, strategy and, pah, defending. Ahead of England’s meeting with Belgium on Saturday, here are the five best third-place play-offs from World Cups gone by.

“Warning: do not cheer for South Korea,” wrote the Telegraph’s Paul Hayward after the 2002 co-hosts advanced to the semi-finals. “The records say that the Koreans knocked out Spain in a penalty shootout in Gwangju on Saturday. The records are a lie and this tournament has descended into farce.”

Lady Luck, it’s fair to say, was supporting the Taeguk Warriors at Asia’s first World Cup. Controversial decisions helped Guus Hiddink’s side past both Italy and Spain in the first two knockout rounds, before the Koreans were finally seen off by Germany in the semi-finals. In that light, Turkey – equally unfancied pre-tournament but benefiting from none of the same favourable decision-making – were arguably the biggest surprise package that summer, only going down 1-0 to Brazil in the last four.

It was Senol Gunes’s charges who edged the third-place play-off in Daegu. Hakan Sukur opened the scoring after 10.8 seconds – still the fastest goal in World Cup history – before Lee Eul-yong’s free-kick levelled things up in the ninth minute. Ilhan Mansiz, taking advantage of some Korean defending which would have left the Keystone Cops shaking their heads in embarrassment, scored twice before half-time, with Song Chong-gug’s stoppage-time effort nothing more than a consolation.

France were involved in an all-time classic World Cup encounter in the semi-finals of 1982, losing on penalties to West Germany after an exhilarating 3-3 draw featuring four goals in extra time. Poland’s last-four clash was rather more low key, a routine 2-0 defeat by a Paolo Rossi-inspired Italy, and perhaps that helped them get the better of a jaded Les Bleus side in the third-place play-off.

It was the French who drew first blood in Alicante, Rene Girard finding the bottom corner with a low drive from 25 yards, but quick-fire strikes from Polish pair Andrzej Szarmach and Stefan Majewski – the first a wonderful finish from a tight angle – turned a 1-0 deficit into a 2-1 lead before half-time. Janusz Kupcewicz’s clever free-kick further increased the Eagles’ advantage just seconds after the restart; Alain Couriol halved the deficit with 18 minutes left to play, but Poland held on for the victory.

Oscar Washington Tabarez is a naturally conservative manager, the type who probably considers two banks of four to be recklessly gung-ho. Yet even he was willing to throw off the shackles after Uruguay’s semi-final defeat by the Netherlands in 2010, which helped produce a thoroughly enjoyable match between La Celeste and Joachim Low’s thrilling Germany side.

Uruguay’s run to the last four in South America marked the start of their revival under Tabarez, who led his nation to the Copa America title in 2011 and the knockout stage of two more World Cups in 2014 and 2018. This was also a coming-of-age tournament for the likes of Toni Kroos, Sami Khedira, Jerome Boateng, Mesut Ozil, Manuel Neuer and Thomas Muller, prominent members of a new German generation who would go on to lift the trophy in Brazil.

Muller broke the deadlock at the Nelson Mandela Bay Stadium in the 19th minute, but Edinson Cavani levelled the scores before the half-hour mark and Diego Forlan gave Uruguay the lead after the break. Marcell Jansen restored parity within five minutes, before Khedira netted a late winner for Die Mannschaft.

No World Cup patch has been as purple as Just Fontaine’s in 1958. The France striker had only played five times for his country before the start of the tournament, but 39 goals in Reims’ double-winning campaign was enough to earn him a starting spot in Sweden.

Fontaine introduced ball to net six times in the group stage, twice in the 4-0 victory over Northern Ireland in the quarter-finals and once more in the 5-2 loss to Brazil in the semis, giving him a remarkable return of nine goals in five games.

The Morocco-born frontman wasn’t ready to settle for single figures, though. His four strikes in the third-place play-off meant he finished an astonishing seven goals clear of second-placed Pele and Helmut Rahn in the race for the top scorer accolade (there was no Golden Boot back then, although the 24-year-old did receive an air rifle for his efforts), with Fontaine’s clinical finishing ultimately the difference between France and West Germany.

France’s 1-0 defeat of Belgium in 2018 was a predictably tense and cagey affair, but no such caution was on display once the chance of a place in the final had been taken away from both of these nations in 1986. The result was a gloriously open encounter between two attacking sides, with Jean Tigana, Jean-Pierre Papin, Enzo Scifo and Jan Ceulemans all strutting their stuff under the Mexican sun.

Ranked! The 10 most incredible World Cup own goals

World Cup Willie: The story of the 1966 mascot

Belgium struggled to keep their sheets clean throughout the competition, conceding five goals in the group stage and only squeezing through as one of the four best third-place finishers. They then shipped three more in an epic 4-3 triumph over the Soviet Union in the last 16, before advancing to the semi-finals on penalties following a 1-1 draw with Spain. Diego Maradona – not so much a key cog in Argentina’s machine as the machine itself – proved too much in the last four, scoring twice to send the Albiceleste through.

It was, then, no surprise when the Belgian backline was breached twice in the first half of the third-place play-off, with France – who had beaten Italy and Brazil in the knockout phase before suffering elimination at the hands of West Germany – holding a 2-1 lead at the interval. Nico Claesen equalised in the 73rd minute, but extra-time goals from Bernard Genghini and Manuel Amoros earned Les Bleus a place on the podium.