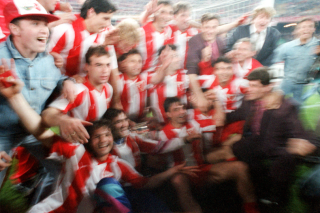 Football is living from anniversary to anniversary at the moment, sustaining itself on increasingly tenuous strains of nostalgia. Less so today, though.

It’s April 10 and 29 years since Red Star Belgrade went to the Olympic Stadium and built a semi-final first-leg lead over Bayern Munich, scoring one of the great European Cup goals in the process.

They would hold their nerve in the second-leg, too, profiting from Klaus Augenthaler’s stoppage-time own goal to draw 2-2 and advance to the 1991 final. Red Star were one of the last winners of the old European Cup and arguably the greatest victims of the rebrand that would follow a year later. Ljupko Petrović’s team may have an enduring relevance within Serbian football’s complicated sense of identity, but elsewhere their memory rather slid between the continent’s shifting plates.

With the same sleight of hand that the Premier League would show in England, UEFA’s Champions League adeptly created the perception of a Year Zero, with the years prior to 1992 condemned to becoming barren, featureless and rarely worth mentioning at all.

The 1990/91 European Cup was primitive by today’s standard, comprising just 32 two teams and structured as a knockout, but Red Star would still win it with some authority. Petrović’s side was loaded with technical ability; Dejan Savicevic’s talent and story is well known, Siniša Mihaljović’s ball-striking ability has endured across western Europe, and Robert Prosinečki would acquire and retain a cultish following in the years after. Petrović was also endowed with an incendiary winger in Dragiša Binić and another firebrand component, in the instinctive and enigmatic forward, Darko Pančev.

A year previously, Dragan Stoijković’s performances at the 1990 World Cup had been enough to convince flamboyant Marseille owner Bernard Tapie to part with nearly £6m. He would ultimately be replaced by Vladimir Jugović in the side and he too would become a very fine player, but the eyes still widen at the thought of how Stojković and Savićević might entwined and flowered, and what sort of spectacle they could have been in bloom.

Like any other side, Red Star’s permanence lives in the goals they scored in becoming champions. It exists in Prosinečki’s twin free-kicks from that run: the sly near-poster at home to Rangers and the 30-yard tracer bullet he hit against Dynamo Dresden in the quarter-finals. It was seen at Ibrox, too, in Pančev’s airborne touch and falling, thumping volley. And – of course – in the shifting of Savićević’s feet as he slalomed past half-a-dozen Dresden defenders back in Germany, scything his way up and into game’s stratosphere.

Outrageous goals, all of them. Free of inhibition, full of life and quite incongruous with the local political mood.

Yugoslavian football and its splintered modern equivalent may have grown a whole raft of unwelcome associations in the three decades since, but its pre-eminent quality then was flair – and Red Star had it in spades. It’s bittersweet irony; that great expression flamed brightest as the country was entering its final and darkest period, as it was being consumed by civil war. The regret of the 1991 final, then – which was won on penalties against a Marseille team which included Chris Waddle, Jean-Pierre Papin, Abedi Pele and Basile Boli – was the lack of testament it gave. It was stale and dour, memorable only for its outcome and – over time – as part of Marseille’s own story.

The two legs semi-final legs that brought Red Star there, though, were flecked with all sorts of colour. The tie as a whole is the subject of 2011 Blizzard article; it’s a wonderful description of a team’s finest moment, but also of a country’s death rattle. Yugoslavia was already bleeding by April 1991 and Jonathan Wilson’s feature does a typically marvellous job of describing the catharsis and chaos which followed the team’s qualification for that final.

The world still doesn’t know what to do with Red Star, though. To celebrate what they were as a side is almost, by implication, to miss the point. Football in Yugoslavia had simmered with violence before 1991 and so to speak wistfully – and exclusively – about a sport under those circumstances, and with knowledge of one of the bloodiest conflicts Europe has ever suffered, seems unforgivably glib.

But then, in this instance, to do otherwise would also be to ignore Red Star’s achievement. It is the only time a Yugoslavian side, or any team from the independent countries created when it shattered, have won the European Cup and, genuinely and without any sort of nostalgic license, they did score one of the finest goals in the competition’s history.

Of course: Pancev’s first-leg equaliser in the Olympic Stadium.

The frame for which was the power of that Bayern Munich side. Klaus Augenthaler and Jurgen Kohler had started in the World Cup final just nine months prior, and Olaf Thon and Stefan Reuter had both been on the substitutes’ bench. Bayern entered that game on the back of five successive Bundesliga titles between 1985 and 1990. They could also call upon the maturing talents of Stefan Effenberg in central midfield, a 22-year-old Brian Laudrup further forward, and the coaching of Jupp Heynckes on the sideline.

It’s certainly true that Bayern were a team approaching a fallow period - they wouldn’t touch another piece of silverware until 1994 - but they remained the proxy for the world champions and an overwhelming favourite.

And they swaggered and strutted their way into the lead against Red Star. Thon knifed the visitors’ backline with an impudent flick and the onrushing Roland Wohlfarth lifted his finish up and over goalkeeper Stevan Stojanovic. Within 24 minutes, Red Star were exactly where they didn’t want to be: a goal behind to a team who hadn’t conceded at home all tournament.

But that made what followed remarkable. Impertinent, even.

With half-time approaching, Bayern were dancing and jabbing in the Red Star half. Thon, with one assist already to his name, pushed a through ball into the channel for Laudrup to chase. Sensing the danger, Slobodan Marović stepped across the Dane, cutting the ball back up field from his own goalline. Miodrag Belodedici and Dusko Radinović followed, pushing instinctive passes on the edge of their box, working the ball to Prosinecki.

With his first touch he pushed away from the broken German press, with his second he carved a fifty-yard pass down the touchline, with a surging Binić bolting after it. Bayern had been cut to pieces. By the time Pancev slid Binic’s cross home at the far post, just fourteen seconds had elapsed between Red Star’s first touch and their last. It’s a fabulous goal. Bold and ruthless, it was full of craft and spoke of a deep tactical trust between teammates.

Were it to be scored today, it would be held up as a reimagination of the counter-attack. It’s certainly easy enough to imagine: the oversized iPad, the gimmicky graphics, and the chin-stroking assertion that – yes – this was the game’s point of absolute evolution, some imagined moment of reinvention.

It wasn’t as opulent of Zinedine Zidane’s volley against Leverkusen or as overwhelming as Gareth Bale’s bicycle kick against Liverpool. Perhaps the broadcast’s blurred edges also denies it some of its crispness, but it’s a startlingly bright piece of football. The ambition, the precision, the fearlessness; it belongs aside any team goal you could care to remember.

In the second-half, Red Star countered again to tremendous effect. A loose Effenberg pass was snaffled and a move began which would end with Pančev and Savićević combining on the halfway line, sending the latter racing away to drill in a second goal. Watched from the right angle, behind the Bayern goal, the images capture the contest: Savićević easing away from Jurgen Kohler with his long stride, and the German centre-half’s face contorted with futility, as his short muscles grind helplessly.

Twenty minutes later, the full-time whistle blew. 1-2 and Red Star had won in Germany. Back in Belgrade, they would need that Augenthaler own-goal to earn the 2-2 draw and a place in the final, but theirs was unquestionably the more vibrant – and modern – performance across the two ties.

What their relevance or place in the game actually is nobody can be certain. It can’t even be determined through the careers that that side helped to build; there’s little rhyme or reason to any of them. Savićević became an immortal, scoring that absurd lob against Barcelona in the 1994 final, as Fabio Capello’s AC Milan trampled Barcelona. The central midfield pairing of Mihaljović and Vladimir Jugović both had strong, sustained careers in Serie A too. But for most of the rest of the side, 1991 was the apex.

Prosinecki would move to Real Madrid in 1992 and would play for Oviedo, Sevilla and Barcelona during his time in Spain, but he never again threatened to touch the sky. Pancev, so prolific in each of his three Red Star seasons, was the biggest mystery: a move to Inter Milan came in 1992, but it delivered almost nothing beyond a cautionary tale.

Fundamentally unsuited to the more rigid mechanics of Italian football, he disappeared behind Ruben Sosa and Toto Schillaci (and later Dennis Bergkamp, too) at San Siro, before his career began a slow slide through the nether regions of the Bundesliga and finally towards the ignominy of Swiss football. He burned ever so brightly, but then never again.

Petrovic has been hiding in plain sight ever since. He was just two years older than Jose Mourinho would be when he won the European Cup and he would depart for Espanyol in the summer of 1991. Time in Chile and Greece, China, the UAE and Rwanda followed, and he was last seen in Bulgaria, coaching CSKA Sofia in 2019. He vanished, but he’s been in the background all along.

Like Red Star themselves, of course. No sooner had they arrived at their peak, then they were falling from it, condemned by circumstances to exist only the sport’s vaguest recollections.

QUIZ Can you name the 58 players to score 30+ Premier League goals during the 1990s?