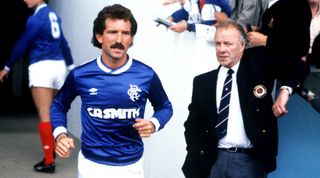 On April 8, 1986, Graeme Souness walked into the Blue Room at Ibrox Stadium and was unveiled as the new manager of Rangers. Not only did he re-awaken a sleeping giant, he also revolutionised the game in Scotland.

The Liverpool legend and Scotland captain, who won three European Cups, five titles and four League Cups at Anfield, had been lured from Serie A –where he’d been strutting his stuff with Sampdoria – to replace Jock Wallace and became the club's first ever player-manager.

It was an incredible coup, orchestrated and planned by chief executive David Holmes, with the ramifications massive not just for Rangers but for the Scottish and British game as a whole. Souness smashed the wage structure at Ibrox, signed the cream of English football and broke down the religious barrier by snatching Mo Johnston from under the noses of fierce rivals Celtic in 1989, ending Rangers' decades-long policy of not signing Catholics.

In five years he won three league titles and four League Cups, helped David Murray buy the club in 1988 and set the foundations for the glorious nine-titles-in-a-row era that was continued by his trusty right-hand man Walter Smith.

He left for Liverpool in April 1991, which in hindsight was the worst mistake he could have made. Even so, Souness left behind a legacy that is still revered by every Rangers supporter.

Just where have all the player-managers gone?

“I got a call from David Holmes at my home in Genoa. We agreed to meet in London and then we subsequently met in Milan,” the Scot recalls to FFT. “Being a Rangers supporter as a boy I knew how big the club was and it was something I couldn’t turn down.

“To say David put his neck on the line was an understatement. I was 33 and I had no experience. He gave me the chance to be the manager of Rangers – the biggest club in Britain in my view – and that must have been a worry to him. It should never be forgotten what David Holmes did. The club was in turmoil and it was fragmented.”

Souness cleverly recruited an excellent lieutenant from Dundee United in Smith, whom he knew from the Scotland setup, and then began to shop in the transfer market he knew best – England.

“I was very lucky to have the right people around me,” he admitted. “Walter helped me enormously. Rangers were in trouble at the time. They hadn’t won the championship for nine seasons. Aberdeen had been strong and Hearts were particularly strong that year, while Celtic were too, so it was a big challenge but one I couldn’t turn down.”

Inevitably Souness had to shake up the squad, and the early signings were key: the captures of England captain Terry Butcher and goalkeeper Chris Woods were unprecedented and ground-breaking, while Tottenham defender Graham Roberts followed later in the season.

With English clubs banned from European football, Rangers, who were now paying some of the highest salaries in the UK, were a very attractive proposition. Existing players like Ally McCoist, Davie Cooper, Ian Durrant and Davie McPherson all responded and Souness suddenly had a decent team.

“We signed some excellent players like Terry and Chris, I was still attempting to play, Coisty was on fire and we were solid,” the former midfielder says. “England was the market I knew and that’s why I went there. We also knew that if we signed a player from an English club and he didn’t work out we could sell him to another English club and not lose money. In fact, in most cases we made money.

“One of the other great lures for players was Ibrox Stadium. It still is one of the best stadiums around, but back in 1986 things were different. This was pre-Hillsborough and before Justice Taylor’s Report, and a lot of grounds in England were old-fashioned and not really up to scratch.

“It was a real selling point to bring a player to see Ibrox, because it was easily the top stadium in the country at that time. I remember thinking that if I could get Terry Butcher up to see it, we could get him. He signed and he was undoubtedly the catalyst for us in the early days.”

Few opponents came out of a challenge with Souness on the winning side. So it proved for striker George McCluskey, with Souness sent off 37 minutes into his debut in August for kicking the Hibs player, having been booked earlier in the game.

There were remarkable scenes at Easter Road as every outfield player – and keeper Woods – were involved in scuffles around the centre circle as Souness trooped from the field. Rangers lost the game 2-1 and the detractors had a field day. Out of adversity, however, came a growing belief that the team could really do something in that first season.

Souness recalls: “My experience from Liverpool and also being a foreigner playing in Italy was that other teams treated it as their cup final when they played against you, so I was prepared for what lay in store.

“However, it was far more intense in Scotland. I was regarded as some big-head coming back to Scotland to show people how it was done, but that was never my intention.

“Of course that first day is something I would like to change. Getting sent off wasn’t the best of starts – especially as my Dad was watching. What I choose to remember is that there was some good to come out of it. I could see there was some team spirit there and I felt if I could harness it then we could be all right.”

It was more than all right: Rangers won the League Cup with a thrilling 2-1 win over Celtic in October to give the new manager his first trophy. They then came from nine points behind their rivals – these in the days when two points were the prize for a victory – to win the Scottish title at Aberdeen in May 1987, their first championship crown since 1978.

The revolution had begun.