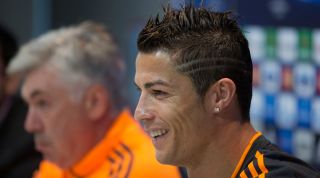 Well, that was a curious editorial line for Marca to chose on Wednesday.

The print edition of the paper once again let loose their infamous creative department, with Cristiano Ronaldo mocked up to look like Napoleon, complete with natty hat. The whole vibe was that the Real Madrid man was on a mission to conquer Europe.

“Alexander the Great, Caesar, Attila, Napoleon and Cristiano Ronaldo,” they gushed, before listing all the teams in Spain and Europe that have felt the footballer’s striking wrath as a Real Madrid player. “Only Dinamo Zagreb escaped his reign of terror in front of goal.” At least the paper cautiously left out one or two other European dictators of times of yore. Now, that would have been a front page-and-a-half.

From being down in the dumps before last weekend, everyone is now very excited about the team's Champions League clash with Juventus in the Spanish capital on Wednesday night. Normally Italian teams spook Madrid, so this game is being used as a litmus test: did a perkier performance in the win against Málaga show Carlo Ancelotti is finally getting somewhere with his team, or were Málaga actually just quite bad? For Ronaldo, though, “playing Juventus is a sign of greatness".

Of course, what the Madrid footballer meant to say that is that playing Juve is a sign that the club did enough to qualify for group stages and happened to be drawn against the Serie A outfit by chance, something that could have happened to Malta’s finest in another dimension.

Real Sociedad are Spain’s plucky underdogs in this year's European campaign - the new Málaga, if you will - and despite bemoaning two defeats from two, there are some hopes that Manchester United might just be bad enough to help turn this sad start around. “I’m not focused on their bad run,” warned La Real boss Jagoba Arrasate, “it can change at any moment.”

The Basque team’s best hope is that unfortunate things seem to happen to the Premier League big hitters when anything connecting with La Liga brushes up against them. Athletic Bilbao mullered the English side at Old Trafford a couple of seasons ago, United lost to Real Madrid in the Champions League last year and former Espanyol boss, Mauricio Pochettino, picked their pockets at the weekend with Southampton.

La Real will be bringing 6,000 fans to Manchester, but Wednesday’s opposition won’t be a surprise to Moyes, says the Scotsman. “I know them very well as I saw their matches last year and some from this season. Finishing fourth in La Liga shows their quality.”

Speaking of quality, Diego Costa returned from European suspension with a blistering performance in Atlético's 3-0 win at Austria Vienna, including a ridiculously good solo effort which involved a 60-metre sprint. The match was Costa’s Champions League debut, but one of the main questions after the game was whether the striker still planned to play for Spain. “The decision has been taken,” said the Brazilian (or is that Spaniard?). “The people who need to know, know.”

Barcelona were not as sparkly but didn’t really need to be in their 1-1 draw against AC Milan in Italy, which will do just fine in the group stages. However, there was criticism in Mundo Deportivo that “Barça have quality but they need to bite. This is the Champions League.”

In their last two games the Catalan club have shown they are going into Saturday’s Clásico at about six out of 10. Europe-conquering hopeful Ronaldo and his team-mates will be setting down their own marker in the Santiago Bernabeu against Juve.