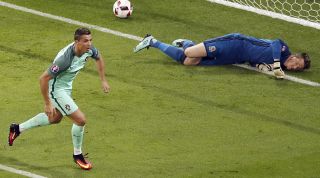 In the battle of the Real Madrid forwards, Cristiano Ronaldo wrote himself into Euros history and ended the Welsh fairy-tale of Gareth Bale & Co.

It is often ridiculously reductive to boil down a team game to a clash of two stars, but it was difficult to avoid that conclusion in this game’s build-up – and aftermath. Let’s not gild the lily, Ronaldo and Bale are enormous stars, the sport’s two most expensive players, and their team-mates – while well-organised – are much lesser lights.

This was exacerbated because each side had lost perhaps its second-biggest name. Aaron Ramsey was suspended for his two yellows, while Ronaldo’s club and country colleague Pepe was absent from the Portuguese back-line with a hip injury. Sadly for Wales, the Arsenal midfielder’s absence made the bigger difference: Portugal kept their third clean sheet of the tournament, while Wales drew their first blank.

Wales also had Ben Davies suspended, replacing him in the back three with James Collins (although positionally, James Chester switched across to Ashley Williams' left), while Leicester bit-parter Andy King came in for Ramsey. Portugal replaced Pepe with 34-year-old Bruno Alves, with left-back Raphael Guerreiro and midfielder Danilo also drafted in.

Portugal certainly paid Wales the respect you'd expect from a semi-finals opponent. Employing a flattish midfield diamond behind the wide-splitting front pair of Ronaldo and Nani, they were quite content to sit off Chris Coleman's side and let them pass the ball around at the back.

The first 15 minutes were fairly quiet, with neither of the Big Two receiving a pass in anything like a danger zone – but then Bale awoke, first meeting a clever pulled-back corner which he pulled just wide, then dashing down the right and fizzing in a cross, then shooting from 25 yards.

It was notable as the half-hour approached that each team was happy to go long, perhaps to bypass the congested midfield, perhaps to stretch the game... but neither side was having much luck with it.

The first-half midfield work was tidy rather than threatening. Adrien Silva's work was typical, never misplacing a pass but rarely sending any forward; Ronaldo was restricted to just 21 first-half touches. As Roy Keane put it with characteristic bluntness at half-time: "It's been really poor, we've seen very little quality."

Still, Wales could come out for the second half hoping to press home the advantage. Throughout the match they enjoyed more possession and completed more passes, but without much penetration in the final third.

They were shown the way with brutal efficiency, going two goals down inside 10 minutes of the second period to Portugal's first two on-target attempts. First, at a 50th-minute corner, Ronaldo completely outjumped Chester to power home a header. The goal moved him level with Michel Platini as the most prolific goalscorer in Euros finals history with nine (although Platini will point out that his came in five games to Ronaldo's 20).

Barely three minutes later, as Ronaldo attempted to cruise past Platini and into double figures, his scuffed 25-yarder was fast enough to bypass Collins and Williams but not too rapid for the quick-thinking Nani to prod past Wayne Hennessey with his studs. Suddenly Wales were facing an enormous challenge.

Coleman's response was either proactive or panicky, depending on your viewpoint: within eight minutes he made three substitutions, changing his system at least twice. First he threw on striker Sam Vokes for midfielder Joe Ledley; then he replaced Hal Robson-Kanu with Simon Church; then he abandoned the back three by sacrificing Collins for Jonny Williams.

Each of these switches may make sense individually, but their rapid succession lent Wales an air of desperation, and none of them really worked. Vokes might have got on the end of a couple of hopeful punts but he more often gave the ball away, while Church had no shots and his five passes were all in the outside-left channel. Between them, the two substitute strikers contributed one shot, off-target.

It's interesting to wonder whether other managers making such ineffective switches might have been slated for it, even if those underperforming players were of a much higher calibre. Coleman will be correctly cushioned by the respect and goodwill he has earned during Wales' fantastic run, but if he is to take his side to a level where they are expected to win most games rather than being the overachieving underdogs, he will need an effective Plan B.

As it happened, what Coleman missed more than anything was the intelligence and penetration of a player like Aaron Ramsey. It's tempting to wonder if Jonny Williams, who spent his 25 minutes buzzing around the Portuguese half desperately trying to link up play, would have been a natural replacement, although it's understandable that Wales went with the sturdier presence of King. By the time 'Joniesta' came on Portugal were 2-0 up and quite happy to sit back soaking up what was thrown at them.

In truth, that wasn't much: it took 76 minutes for them to register a second attempt on target, a hopeful attempt from distance by Bale. Although Wales outpassed Portugal, with 441 completions to 325, much of that was in unthreatening areas that Fernando Santos's men were far too wily to be drawn into.

Portugal had less possession (44%) but more penetration: they completed 72 passes (22% of their total) in the final third compared to Wales's 54 (12%). And, crucially, they cracked off twice as many shots: 18 to 9, with 6 on target to Wales' 3 – all from Bale, all from distance, all easily dealt with. Ronaldo, ever the opportunist, ended up making 9 attempts at goal, the same as Wales' entire team.

And so Ronaldo and Portugal once again did what they used to do to England: ending a tournament run amid a welter of what-ifs and grumbles about disciplinary procedures. Meanwhile Wales, like England, exited Euro 2016 because they failed to turn majority possession into goals.

But there's no doubt Coleman's story is an immensely happier one than Hodgson's: Wales progressed not just to the semi-finals but to the point where they may be disappointed to lose to "a team like Portugal", a side who still don't look very impressive but know how to maximise their resources.