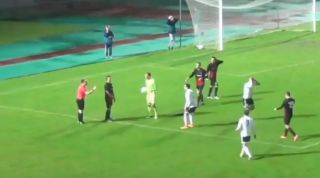 With the score at 1-1 in the second half of this Russian second division match, Tekstilshchik Ivanovo goalkeeper Alexei Smirnov hauled down a Torpedo Vladimir striker in the penalty area.

But a spot-kick wasn't awarded, and referee Pyotr Miroshnichenko decided to give a free-kick instead.

The following set-piece appeared to be handballed in the box – but again the referee turned a blind eye.

At this juncture, commentator Vladimir Nikolsky was at boiling point. He went on a lengthy rant, labelling the referee a "disgrace to Russian football" before huffing: "Watch the football without a commentator."

True to his word, Nikolsky stormed out.

He told Russian broadcaster RT post-match: "I become emotional when I see that our team is being hurt."

It turns out that Nikolsky is paid to do commentary for Torpedo matches, and therefore his bias is unlikely to see him punished by the club he loves. Poor chap.