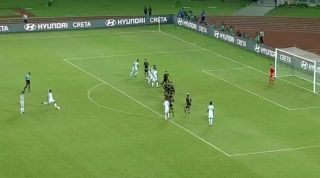 In the 39th minute, the Liverpool youngster perfectly placed his free-kick from 25 yards into the top corner for his first World Cup goal.

It's been a highly successful campaign for England so far, having followed up their 4-0 victory over Chile with a 3-2 win against Mexico to progress with a game to spare.

Diego Lainez pulled two goals back for Mexico, but it wasn't enough to stop England from claiming the three points to top Group F.