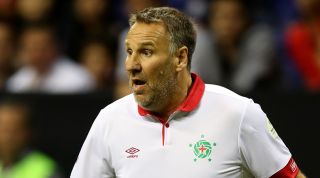 Caraeu's club secretary Dai Hooper met Merson at a function a few years ago, and messaged the 49-year-old on a whim to see if he fancied playing a game for them.

"I texted him last week with the rearranged fixture against Pontyclun and he said 'I can make that'," Hooper told BBC Radio Wales.

"So we're hoping now that the international clearance goes through because obviously he played in England."

The Soccer Saturday pundit has appeared in a few notable football matches in recent months. He played for England in a legends tournament at London's O2 Arena in the summer, as well as the #Game4Grenfell charity match.

When asked about Merson's fitness, Hooper simply replied: "He's been looking OK on the box."

Merson has previously played in Wales for Welshpool Town in 2012, when he scored their only goal in a 4-1 defeat.