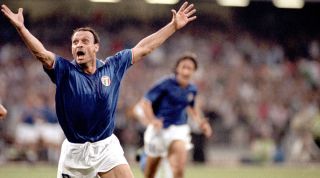 How did it feel to arrive at the World Cup having played only one international?

My greatest satisfaction was just being selected for the Italian World Cup squad. I had no responsibilities as I was just one of the 22 players selected. That moment was fantastic, and even if I didn’t play, I would have been just as happy to be sitting on the bench.

When did you feel you might have a chance of getting on the pitch?

It was during practice that I was able to show my skill and qualities, and [Italy coach Azeglio] Vicini considered letting me play. My first match at the World Cup was also my first competitive game for the national team, and it led to my story.

You came on as a late substitute in Italy’s first game and immediately scored...

I started on the bench and even that was still amazing to me. I remember coming on in the 75th minute and I was a little scared. It was the Olympic Stadium and I’d never worn a blue shirt before, I never even tried one in a friendly. Then, as soon as I was put on the pitch my main concern was to do well, but it all happened so quickly. I didn’t even think of goalscoring as it was all so quick. It was a matter of seconds; go out there and score goals.

The strong amount of adrenalin I had within me meant that within five minutes of getting on the pitch [Gianluca] Vialli had passed the ball – and I hit it in. At that moment everything went mad. I started running and leapt on to [reserve goalkeeper] Stefano Tacconi. You feel so emotional. I had just scored a goal and in that moment I started running. I didn’t know where to run and just ran to the bench – it was a fantastic emotion, it was indescribable.

You finally made the starting XI in Italy’s third game. Did this give you a confidence boost?

I characteristically never take anything for granted. For me, each game is a lottery. When the match is over I treasure the moments of the day, and then I forget about it and move on. That is my strength and that allows me to go forward.

Why didn’t you take part in the semi-final penalty shootout against Argentina?

I had a muscular injury to my leg and was tired, so I thought I’d leave it to someone in better condition than me, someone better at taking penalties.

I’m not a great penalty taker. I’ve got lucky with some and I’ve missed some. When you’re taking a penalty you think of lots of things, failure and achievement, and at such an important event there is a fear of getting it all wrong. It’s a huge responsibility to take on. I would have liked to have had a shot, but I couldn’t even kick properly. I’m not backward, even if I’d missed the penalty I’d already scored five goals, so it wasn’t going to be my fault.

How did you feel after Italy were knocked out?

It was very difficult to take in. It was as if a large building had toppled on me. I spent more than two hours in the changing room smoking, and I cried as well. It was something that seemed to have slipped through our fingers and the disappointment and sadness was very great. I would have readily given up my Golden Boot award in order to have won the World Cup.

How did you get to take the penalty that made you the tournament’s top scorer?

It was at the end of the third-place play-off game against England. I was asked by Roberto Baggio to take the penalty – he said: “You take it and you can be top scorer.” I accepted this offer from Baggio and with this penalty I won the Golden Boot.

How do you look back on the tournament now?

The 1990 team had lots of excellent players and we played one of the best games by the national team. We played without losing a game in that tournament. We played well and we had the chance to go forward and play against West Germany in the final, but the error of Walter Zenga compromised us going forward. As you know, we lost the semi-final on penalties.

How did Italia 90 change your life?

Even when I go abroad, thanks to the World Cup people know who I am. For any player, playing for your country should be your first priority because it can change your life, the way it changed mine.