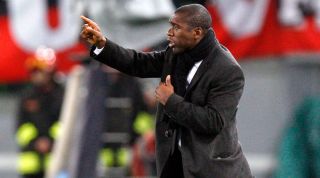 When Paolo Maldini has something to say, you are going to listen – unless you're Adriano Galliani, apparently. Last week, in a stinging interview with La Gazzetta dello Sport, the Milan legend tore into the boardroom bods who he believes are running the club into the ground.

There was a full and wholesome attack on his old opponent Galliani, who has reportedly continued to veto the former defender’s return to the club since his retirement in 2009, claiming that although Maldini was a great negotiator he knew little about players and relied on the knowledge of others like Leonardo.

But with no former player to fall back on, Maldini felt Galliani had become “omnipotent”, believing his own press that it had been he alone who had taken Milan to the top. As the former defender pointed out, since selling Zlatan Ibrahimovic and Thiago Silva in one go, Milan have failed to replace them adequately despite signing Mario Balotelli. He conceded that the decline began after winning the Champions League in 2007 with an ageing side.

Maldini is now 45, and believes he can provide the expertise to unearth players that fit the Milan profile of old. The Italian legend revealed he had held talks with Silvio Berlusconi’s daughter Barbara about taking over from Galliani, who currently shares chief executive duties with his female foe. But Maldini was left in limbo.

Such uncertainty around the club is worrying – for so long Milan had been an example of the kind of management that encouraged players and coaches to join them. It was hoped Clarence Seedorf would have had a galvanising effect when he took over from Massimiliano Allegri, but, as Maldini points out, not even Pep Guardiola could have done much to turn things around.

Eleven points off the final Europa League spot going into their weekend fixture at Lazio, Milan were facing the prospect of a fourth consecutive defeat, something which had not occurred since 1986 in the year Berlusconi bought the club.

Seedorf has only been in the coaching hot seat since the middle of January, but in that time the Dutchman has overseen exits from both the Italian Cup and Champions League – the latter a humiliating 5-1 aggregate defeat to Atletico Madrid – and a league record of four wins, four defeats and a draw. Milan have shipped 11 goals in their last four matches, highlighting how far away Seedorf’s approach is from working. Reports have claimed the former player would like to offload up to three-quarters of his squad next season.

That the source was a member of the club’s Ultras only muddied the waters further. Other rumours suggested that Seedorf would not get his wish to rebuild the squad, with perennial assistant Mauro Tassotti ready to step in until Filippo Inzaghi's promotion from the youth team in the summer. Either way, it's hard to see what a second change of manager in three months would achieve.

In many ways Seedorf’s plight mirrors that of Leonardo; even though the Brazilian had a whole season and ended up finishing third, the Rossoneri were also knocked out of the Italian Cup by Udinese and suffered a heavy defeat at the hands of Manchester United in the Champions League Round of 16. But Leonardo’s relationship with Berlusconi soured. It culminated in the Brazilian labelling his former employer a "narcissist", as he walked out to take the reins at Inter before returning to the position of sporting director at PSG.

The debate over whether a great player can become an equally successful coach goes on. In general, the feeling is that there needs to be an apprenticeship away from a high-profile post. Antonio Conte, for example, served time in Serie B, and had spells with Siena and Atalanta before feeling confident enough to take over at Juventus.

Seedorf has been thrown in at the deep end, and is coming to terms not just with tactics but also man-management. He has tried the softly-softly tactic with a reassuring arm around Balotelli’s shoulder, which hasn't worked: the striker has often looked listless and totally discouraged by his fellow team-mates. The former Manchester City striker has taken more to berating them, and, interestingly, Maldini felt that if Mario were at Juventus he would be a lot more super than he is now. That theory may be open to conjecture – there seems to be little going on to change Balotelli’s maverick ways, with the striker most recently taking to his Twitter account to suggest he would leave if he had become a “burden”.

It seems no one at Milan is feeling self-assured anymore – apart from Galliani that is, who looks to have re-established his position as team's moral support, and joined them at their Rome retreat before this week's midweek league match against Fiorentina.

Facing Lazio in the Eternal City on Sunday looked the perfect opportunity to provide some stability. The home side had problems of their own as fans continued to protest against president Claudio Lotito and his running of the club, especially in the transfer market after star player Hernanes was sold to Inter. Stand-in coach Edy Reja wasn't under any real pressure – he doesn't expect to be there next season – and with a less-than-supportive atmosphere inside the Olimpico, Lazio had only managed to win once in their last four home games (failing to score in two of them).

The fall-out from last weekend’s setback against Parma saw Seedorf ring the changes. The biggest casualty was Balotelli, who was left on the bench in favour of Giampaolo Pazzini starting as the lone striker.

Seedorf’s desire to see his side bring the ball out from the back meant Philippe Mexes retained his place in defence alongside Adil Rami. Their task was to instigate moves from deep inside their own half, which for most of the first half failed to work as neither Nigel de Jong or Michael Essien looked comfortable in possession. However, Kaka still has a moment or two of magic, and it was the Brazilian’s dip of the shoulder and deflected shot from the edge of the area that put the visitors ahead on the stroke of half-time.

After the break, a positive Lazio found an equaliser with Alvaro Gonzalez’s close-range finish on 62 minutes. From there it could have gone either way as both sides finally threw caution to the wind; substitute Balotelli hit the post, but in general still wasn't on the same wavelength as the rest of the team.

There were, however, some encouraging signs that Seedorf can survive his baptism of fire – especially if Riccardo Montolivo can be encouraged to play as the deep-lying playmaker by picking the ball up from the two central defenders and getting Milan going forward further up the pitch. The Italy international missed the weekend draw through injury, but should return to face his former side in Florence. The draw in Rome may have left Milan well off the European pace, but at least it was a small step in the right direction in what has been a turbulent time for this grand old club.