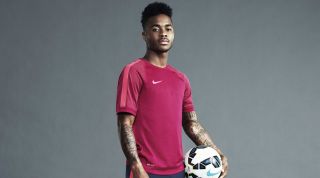 How excited are you about the signing of Mario Balotelli?
He’s a massive player. The manager has brought him in and it’s exciting times for Liverpool. This is a step forward after losing Luis [Suarez] at the start of the season. He [Balotelli] has come in to try and fill the void left by Luis and I think he has the qualities to do so. I’m looking forward to working with him and I think he can be an important player for the club.

What can he bring to the team?
Goals. Obviously we lost a goalscorer in Luis so it’s something we’re going to need to replace. He’ll also bring a presence on the pitch, especially up front, as part of our attack.

How do you think your game can benefit from Balotelli’s presence in the team?
I’ll just play my normal game – I won’t be changing anything too much. Obviously, I’m going to try and strike up a connection with him.

How do you feel the squad is shaping up for the new season?
We’ve signed a lot of new players and I feel like we’ve got a lot more strength in depth this season. Balotelli is another great addition to the squad and hopefully he can bring us more goals. The manager has got a lot more attacking options this season so there will be more competition for places week in, week out.

Are the other players excited about Balotelli signing for the club?
We had a game [the 3-1 defeat at Manchester City] so everyone was focused on that. Everyone knew he was coming in and it’s an exciting time for the club, bringing in another world class striker.

Do you speak to Dr Steve Peters to help you prepare for games?
Yeah, I speak to him all the time. He was there for the Southampton game and I spoke to him in the changing room beforehand. He always asks, “Are you in a good place mentally?” If I get a chance to speak to him, I will, and he helps me get in the right mindset for the game. He’s been a massive help. He’s there for you when you need him – if you feel there’s anything you need help with or there’s anything you need to improve on you can speak to him and he’ll help guide you. He helps you prepare mentally for games and training sessions. But ultimately it’s down to you to take on that advice and put it into action. He’s been a massive addition to the club.

What are Liverpool’s targets for this season?
We should definitely be aiming to be challenging for the title come the end of the season. Yes, we lost to City, but we have to keep working, developing and trying to win games as we did last year. Some of the players like myself, Philippe [Coutinho] and Jordan [Henderson] have to chip in with more goals, and if we can do that we can be right up there at the end of the season.

What are your personal targets for the season?
To play regular football and achieve my personal goals, which are to score more goals and create opportunities for my team-mates. I’ll do everything I can to achieve this.