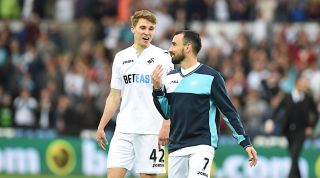 There probably shouldn't be a Premier League stadium in Swansea. The walk from the train station, up the hill, over the overpass, and down through nondescript suburbia is no rainbow on the way to a pot of gold. But then, that’s how it should be: Swansea have come a long way and the Liberty Stadium, with its jagged architecture, is a reminder of that. Many modern grounds are set apart from their communities but this one has gently maintained its ties. Not with the high street, which is decorated with the usual commercial staples, but with the part of town where people actually live.

Unfortunately, that also frames the regret. Swansea were football’s good news story: the club who escaped the jaws of oblivion and climbed up and away on the backs of their supporters. Their stadium still sits close to its people, but the figurative gap has been widening for some time. The tether has been gnawed by self-interest.

On Saturday, Everton arrived in South Wales. Swansea started the day two points behind Hull City and knowing, realistically, that only nine points from their final three games will do. It’s a strange situation. The team aren’t quite unrecognisable from the one which sank to the foot of the table in 2016, but they are improved. Paul Clement has arrived, implemented a discernible order, and overseen an upturn in form. It’s been noticeable enough to be vaguely impressive, but periodic reversions have stood in the way of security; Swansea shouldn’t be in this position, but they are.

That’s a familiar theme. The Premier League may be a testing environment, but this club have befuddled themselves into the wilderness. They are not Sunderland, who have been asking for relegation for years, nor are they Middlesbrough, who just aren’t yet equipped for this level. Instead, their current struggle is the legacy of unnecessary disruption: 2016’s takeover which, according to reports, bypassed the Supporters’ Trust, the ill-advised decision to extend Francisco Guidolin’s contract, and then Bob Bradley short reign of... goodness knows what. In the time since, new owners Steve Kaplan and Jason Levein, with the help of the affable COO Chris Pearlman, have been able to patch some of the local wounds, but the on-field situation remains troubling.

Relative harmony has arrived, but maybe too late? There are good background ideas taking root, with Daniel Altman’s analytics team primed to provide assistance with future transfer dealings and Clement showing that he is a capable coach, but a backwards step into the Championship now would be a terrible waste of a decade’s work.

The feeling seems to be that, if the team can just muster the points to save their Premier League life, a coherent, recognisable Swansea City might emerge from the chaos.

Pre-game, good news: Sunderland's unlikely win over Hull opened the escape hatch. Nervous supporters who had been huddled around concourse televisions celebrated before, wisely, realising that their team was yet to actually crawl through it. Everton's season may have already come to an end, but they still comprise Romelu Lukaku, Ross Barkley, and Idrissa Gueye: a team with an obdurate middle and a potent forward line.

But so often in this type of situation, the small margins created by varying degrees of necessity show. So it was here. Just before the half-hour mark, Fernando Llorente reacted quickly to a scooped Jordan Ayew cross, climbed above Phil Jagielka, and headed Swansea into the lead. Earlier, Tom Carroll had muscled Lukaku off the ball and, in another descriptive moment, Leon Britton rose above Kevin Mirallas to win a header. Ronald Koeman is not the most light-hearted soul and presumably didn’t enjoy the tell-tale signs of late season apathy.

Nevertheless, Clement has created an honest side. They’re more pragmatic than they were, often playing long and direct rather than risking turnovers, but they now have a structure. Full-backs Olsson and Naughton provide the width, Llorente the focal point, and - Gylfi Sigurdsson’s craft aside - the rest are charged with bringing the industry. It will take some time to completely eliminate the squad’s weaknesses and its lack of depth, but Clement has done quite a lot with a little.

Therein lies Swansea’s footballing charm. If the issues beyond the pitch have created difficulties, the players and the new coaching staff have worked admirably to provide the opportunity for a re-set. Make no mistake: if relegation is avoided and the ownership get the chance to recalibrate in the Premier League warmth, they will owe Clement and his squad a big debt of gratitude.

That rather contradicts the usual narratives that surround a relegation fight. In most cases, the talk is of disinterest and dishonesty; of players accepting their fate and plotting a way out. But in this case, there’s been no lack of spirit. Even the players who surely know that they could earn transfers away over the summer have been admirably committed. Sigurdsson has often been a talisman, Llorente has fought many battles by himself at the top of the formation and, when needed, in his own box, and even Ayew - scarred by his experiences at Aston Villa last season - has shown himself willing to work and adapt himself to usefulness.

On Saturday, there was something fitting to Leon Britton’s performance in particular. Having represented the club in all four divisions, he naturally enjoys a special relationship with the crowd but, at 34, he’s approaching the ceremonial years of his captaincy. This, though, was a leader’s performance: an evening when he took responsibility, throwing himself into tackles, showing for the ball whenever needed, and standing in protection of something which, ultimately, he helped to create. A standing ovation when he left the field on 70 minutes. Rightly so - how appropriate for him to lead from the front, charging around to the sound of Hymns and Arias.

No, this won’t be remembered as a conclusive win. Indifferent or not, Everton did manage to make home hearts flutter in the final minutes and nobody inside the Liberty Stadium can claim to have been in any way comfortable. Each block was cheered, every clearance celebrated and, at times, the hosts defended with little more than force of will. But this is not the time of year to worry about style points; Swansea did enough.

Enough to win the points, enough to move into the light, and potentially enough to give those who created this mess the chance to untangle it.