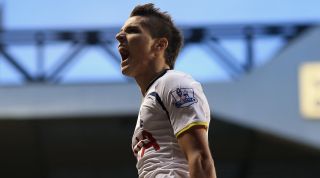 A gritty, stilted match is likely between two teams currently drifting towards the summer, unable to find solutions to their respective fluidity issues.

Newcastle will fully anticipate being forced to play on the counter by Spurs' high-pressing system, and as such Mauricio Pochettino's primary concern will be tinkering with an attacking midfield struggling for form.

One plausible solution as yet untested would be shifting Erik Lamela – without a start since February – to the left wing, a role in which he flourished during Spurs' 5-1 Europa League win over Asteras Tripolis. It is worth noting that Spurs have picked up 16 points from the last eight matches in which Lamela has started.

These Stats Zone screens are taken from the most recent starts given to Nacer Chadli and Lamela (who, incidentally, played on the left in this game - a 2-2 draw at home to West Ham).

Chadli usually gets the nod, but after a failed attempt playing Christian Eriksen in this role during the miserable 1-0 defeat against Aston Villa, Pochettino clearly realises that other options must be tested; Tottenham have failed to score in three of their last four matches.

Goals have been a rare commodity in north London thanks in part to opposition managers' increasing awareness of how to nullify their attacks. By exclusively utilising inverted wingers, Spurs are too centrally focused, with 56.4% of their chances created in the middle (more than any other top-half club). A deep-lying, compact defensive structure is often too congested for Spurs to break through.

Note how narrow their chances created are.

Fielding a left footer on the left flank could help add width to the team, just as Aaron Lennon's introduction at Everton has done. By stretching the opposition backline into wider areas, Lennon's movement has opened up central space for Ross Barkley. Lamela could complement Eriksen similarly.

Whoever Pochettino plays, there is only one Newcastle player likely to provide adequate defensive cover. Jack Colback continued his superb season with a passionate display at Anfield, making 4 tackles and 4 interceptions despite the positional chaos that surrounded him.

Typically playing on the right side of central midfield, Colback is Newcastle's sole source of defensive cover thanks to Gabriel Obertan's uninterested approach to tracking back. If Spurs situate Lamela on this flank, they could drag Newcastle's most important player out of that crucial central defensive zone.