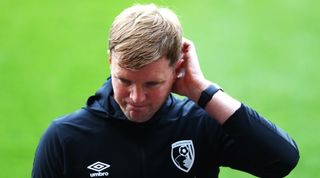 Watching the body language of all the coaches threatened by Premier League relegation, you start to notice many of the same traits. With the exception of Norwich City’s Daniel Farke, who seems to have reached the cheerful acceptance stage, the rest appear to be watching their teams with dazed horror, impotent to change what they don’t recognise from the training pitches.

It varies from coach-to-coach, but that helplessness is never too far away. It’s in Eddie Howe, it’s in Dean Smith, and – in spite of the bulging forearms and piercing eyes – it’s in Nigel Pearson too, and in his increasingly empty glare.

It’s that same look: what am I supposed to do about this? What can I do?

Understanding that depends on an appreciation for what relegation football is. In a few rare instances, teams lose their top-flight life just because they’re not good enough to keep it – their players can’t pass, shoot or defend well enough to exist at such a level of the game. More often than not, though, the separation at the bottom of the table – any table – is drawn by a lack of confidence.

NEXT SEASON New Premier League kits 2020/21: every released home and away shirt so far

It’s what often makes relegation football so inexplicably bad. Awful in that slapstick way which wouldn’t be forgivable in a schoolboy team. Players already lacking in self-confidence become consumed by the importance of every touch, pass or tackle and the cumulative, inhibiting effect has been seen in many of the mistakes made seen since the restart. The first goal Bournemouth conceded to Newcastle, for instance, or Tim Krul’s hopeless attempt at a clearance. Or that ridiculous penalty Etienne Capoue conceded at Stamford Bridge on Saturday night.

When pundits analyse performances at this time of year – or the time of year when these games should be taking place – it can often seem like an act of cruelty. With all those natural afflictions considered, is it really fair to pick apart the failing defensive systems or to note, after he’s ballooned a shot over from six yards, that a forward really ought to be ‘doing better’.

No, but it’s pertinent because these are the issues that the coaches have to deal with; they may have the right strategy with which to plot an escape, but that’s redundant if not accompanied by the means to actually perform it.

What that alludes to is the futility of coaching teams in this position. It was something which actually came to mind after that Dwight Gayle goal at Dean Court on Wednesday, and what a betrayal that was of all the work that Eddie Howe and his staff had put into their preparation.

Think of what that had entailed for Howe. There were seven days between Bournemouth losing at Molineux and the game with Newcastle. That equates to hours spent reviewing footage, and then studying weaknesses identified in Newcastle’s lineup. That would then have become hours and hours spent on the training pitches, divided up between drills, each of which have been carefully designed to hone one thing or another.

And then, after all of that – after the nights spent lying awake, the hours used to pour over opposition analysis, and the sessions dedicated to inflating morale – the game begins with a cheap giveaway, as soft a goal as its possible to surrender, and all of that work is undone.

The metaphor is of a player spending a week in physiotherapy, having a muscle repaired fibre-by-fibre, only for it to fail after his first stride back across the touchline. Mentally, the sense of futility would be overwhelming. We know it is, in fact, from the autobiographies which tell us how harrowing those setbacks are and which describe how difficult it is to keep faith in a failing body.

For a coach, those weak muscles are a weak team – it’s something that can be nurtured, repaired, and encouraged but which collapses in on itself the moment it’s exposed to any external pressure.

That’s probably the right way to convey the emotional difficulties facing these coaches. Avoiding relegation may often been depicted as a technical challenge and, to an extent, it absolutely is. Defences have to be tougher, attacks need to be more potent. That goes without saying. But on a human level, for the men trying to perform these rescue acts, the task of managing something so brittle and disaster-prone has to be incredibly onerous.

It’s human nature not to keep faith in what logically appears a hopeless cause. Retaining enthusiasm and energy for that task, then, has to be an act of wilful denial. After all, how can a training session be prepared properly if it’s accepted that, ultimately, its purpose will just be defeated by a clumsy centre-half or a nervous goalkeeper? Pretending otherwise requires a state of near-madness; isn’t that the definition – doing the same thing over and over again and expecting a different result?

Perhaps that’s what lurks behind the dead eyes and those thousand-yard stares.

TRANSFERS Thiago Alcantara to Liverpool? Why it makes no sense – and why it makes complete sense