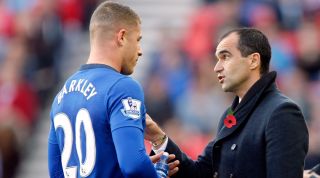 In Premier League terms, the concepts of technicality and tenacity are often seen as opposing: technical, passing sides are considered modern football teams that want to outplay the opposition, while tenacious, hard-tackling teams are destructive and want to shut matches down.

The problem with Everton, however, is that they're currently not playing either style effectively. That's somewhat surprising given their good form last season in Roberto Martinez's debut campaign in charge, and considering the Spaniard's obvious love for possession football.

But Everton aren't creating enough during their long spells of possession – and, in that situation, their lack of grit becomes even more obvious.

Without the ball, Everton are frustratingly passive. The statistics summarise this nicely: Everton have made the second-fewest tackles in the division, after Swansea, and the second-fewest interceptions after Chelsea.

Being so ineffective in both ball-winning methods is a dangerous combination, and while it's partly because of Everton's high possession count, the statistics support the idea that Martinez isn't particularly good at drilling a side without the ball. Many good passing sides are also excellent at pressing, but not the Toffees.

The 3-0 defeat at Southampton shortly before Christmas was interesting in this respect. Everton had 56% of possession, so you'd expect the Saints to have more opportunities to win possession. However, they made three times as many interceptions, and over three times as many tackles – the difference was quite stark.

Fouling statistics are also interesting. Everton are the most-fouled team in the division by some distance, and have also committed the fewest fouls themselves. This is arguably not an entirely bad thing, but when the Merseysiders aren't playing effective passing football, it often appears like they're simply too meek. The 1-0 home defeat to Stoke – inevitably – was a good example.

To a certain extent, this is to be expected from Martinez's side, and the more pertinent issue is that they're simply not doing enough with the ball. Everton's possession statistics and pass-completion rate are both up by exactly 1% from last year, but they're actually less effective with the ball.

This, perhaps, is because opponents have realised Everton lack creativity when attempting to break down packed defences, and some of their best performances last season – the 3-0 counter-attacking win over Arsenal, for example – was all about hitting teams with pace.

The most amazing statistics from Everton's season, however, concern assists. Here, Leighton Baines is way out in front on 8, and while the left-back has sometimes been used in midfield this season, we know what he's all about: whipping in crosses, corners and free-kicks. He's a fine source of chances, but he's not the type of player who regularly plays a through-ball between defenders to unlock a well-organised defence.

Then there's a massive gap behind him in terms of assists. Seamus Coleman, the full-back on the opposite side, has managed 2, striker Romelu Lukaku has also got 2, as has Steven Pienaar – who has only started three games because of injury. No one else has more than 1.

Then, the situation becomes clear: one of Everton's major problems is that their attacking midfielders simply aren't creating enough chances. The recent goalless draw against West Brom was a good example – the 'chances' were just pull-backs for shots from hopeful positions, which were often blocked.

In this respect, Martinez has packed his side with two many similar players. Kevin Mirallas, Aiden McGeady and Steven Naismith are all up-and-down types, footballers who like running with the ball, and can get themselves into the box to score goals. But they aren't actually inventive players, creators who thread the ball neatly between players. Lukaku's movement into the channels is very good, but too often he's not been found.

Like Pienaar, Leon Osman has also not enjoyed much playing time this season – and as one of Everton's most prolific creators last season, he's been a big loss. But arguably the most interesting case is Ross Barkley. He's been underperforming this season, and has frustrated Everton fans with his overly-safe distribution.

The interesting thing, however, is that Barkley has only ever managed one assist in his Premier League career – on his first appearance this season, a 3-0 win over Aston Villa.

That is staggering. A highly-rated young attacking midfielder who appears to have all the qualities to play as a No.10, simply doesn't create any goals.

It certainly wasn't obvious last season, when he was impressing with his positioning, movement, link-up play and eye for goal, but it appears he didn't manage a single assist. For a player in his position, that's somewhat inexcusable, and his recent performance against Hull sums it up – his passing is just too safe.

Maybe, then, this is part of Everton's problem – their side is based around an attacking midfielder who doesn't actually create goals. It would explain why Martinez has tried Barkley wide, and in a deeper position, rather than as the No.10. With Everton's possession share up, but their shots overall and shots on target down, the lack of creativity is clearly an issue.

Barkley remains a hugely promising player, but is perhaps currently unable to provide what Everton need – creativity might come at a later stage in his career, with good coaching.

With Osman and Pienaar not expected to return anytime soon, however, it's tough to see how Everton can improve the situation, and the loan signing of Aaron Lennon might not solve anything.

For this weekend's meeting with Liverpool, a direct approach might be best, because the Toffees don't appear able to break down a packed defence.