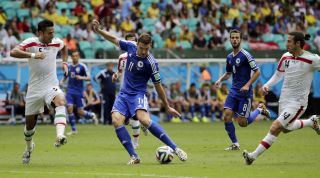 Iran's tactics in their opening two matches was to defend deep and look to frustrate the opposition. You have to say it worked to a degree - they were able to hold Nigeria to a 0-0 draw and almost matched that result when they faced Argentina, only for an injury-time Lionel Messi wonder-goal to seal a 1-0 victory for the South Americans.

They adopted a similar approach in their third and final Group F match. In the early stages they were sitting off their opponents so much they actually completed just 19 passes in the first 20 minutes, enjoying 17.2% of the possession

Iran were unable to hold off Bosnia for too long, with Edin Dzeko finally getting his first World Cup finals goal. The Manchester City striker has endured a difficult tournament, spurning several good chances in Bosnia's first two matches and having a legitimate goal incorrectly ruled out by a linesman for offside. This time, however, he hit the mark. He picked up the ball from Miralem Pjanic's pass before rifling a low shot into the bottom corner from 25 yards.

It may not have helped Bosnia do anything more than win this match, but it will at least have lifted some pressure from Dzeko's shoulders, should his nation qualify for the next World Cup in Russia in four years' time.

While Dzeko's performances in Brazil may not have been entirely impressive, the same can't be said of his team-mate Pjanic. Not only did the Roma playmaker assist Dzeko's goal, but he also chipped in with a strike of his own to double Bosnia's lead just before the hour mark.

Another Bosnian player to catch the eye was Ferencvaros midfielder Muhamed Besic. The 21-year-old made 4 tackles and completed 84 passes - more than any other player on the pitch, and his all-action approach made him the perfect foil for Pjanic in the middle. He was, however, perhaps a little fortunate to avoid being booked far earlier than after his 6th foul. He may have been a little nervous after his 7th, too.

It's not hard to imagine there being great interest in the midfielder's services this summer.

For a brief period it looked like Iran may be able to drag themselves back into the match - Charlton's Reza Ghoochannejhad tapping in Nekounam's cross - only for Vrsajevic to reinstate Bosnia's two-goal advantage moments later.