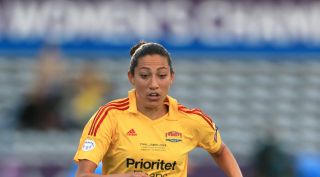 Star United States women's national team forward Alex Morgan is in France playing for Lyon this spring, Crystal Dunn signed an 18-month deal to play for Chelsea, and Heather O’Reilly joined became the third prominent American of the month to leave for Europe when she signed with Arsenal.

Top U.S. women’s players plying their trade in Europe might seem like a new trend, but it isn’t. In fact, major names have gone across the pond before. Some you may remember, like Christen Press and Ali Krieger.

Others, such as Lorrie Fair (Chelsea/Lyon) and a host of 99ers, may have been forgotten as paving the way. Gina Lewandowski is also now a staple with Bayern Munich after winning the UEFA Champions League with Frankfurt.

This list isn't exhaustive -- countless Americans have played in Europe. We take a walk down memory lane to look at some of the more notable American women’s players who have suited up in Europe:

Ali Krieger is one of the U.S' most successful exports to Europe, becoming the first American to win the Women's UEFA Women's Cup (now Women's Champions League), in 2007/2008, along with Gina Lewandowski. In the same year, she helped her side win the German league title (Frauen-Bundesliga) and the German Cup.

The Orlando Pride defender also enjoyed a short spell with Sweden’s Tyresö, moving to the club with Ashlyn Harris to link up with Christen Press, Whitney Engen and Meghan Klingenberg.

After the collapse of WPS, Christen Press sought to continue her soccer career in Sweden after joining Kopparbergs/Göteborg in 2012. She finished the campaign with 25 goals and a domestic cup, before moving onto the star-studded team of Tyresö.

Alongside the likes of Marta and Vero Boquete, Press went onto finish runners-up in the Swedish Damallsvenskan, but became the first American to top the league's scoring charts with 23 goals. In that same year, she helped her side to the UEFA Women's Champions League final, where Tyresö lost a thriller to Wolfsburg, 4-3.

Engen, like Press, was part of the Tyresö team that reached the final of the UEFA Women's Champions League, but it was her one season with Liverpool Ladies in 2013 that she should really be recognised for.

Coming into a team that had finished bottom of the FA Women's Super League the previous two years, Engen entered a team that had been significantly overhauled by now Boston Breakers Head Coach Matt Beard. She was one of the standout defenders and helped her side win their first league title.

This is one people may not be aware of, but the trio of 99ers actually had a spell in Sweden with Tyresö in 1994.

Foudy, Akers and Lilly were joined by fellow American Mary Harvey, who won 27 caps for the U.S, as they helped the team finish mid-table in the Swedish Damallsvenskan. Amanda Cromwell, now coach at UCLA, also had a year with the club.

NEXT: Americans at PSG and Lyon

Before committing to UCLA, there was much talk that Mallory Pugh could skip college to head into the NWSL. One player who turned down the college system -- and a full scholarship at UNC to head over to France -- was an 18-year-old Lindsey Horan.

The now Portland Thorn made the bold move to head to Europe as a teenager in what was an unprecedented move that came with a reported six-figure salary. Horan tallied 53 goals in 75 games for the club, and helped her side qualify for the UEFA Women’s Champions League final in 2014/2015, but she missed the final.

Like Alex Morgan, Megan Rapinoe signed an initial six-month contract to join the French powerhouse of Lyon prior to the start of the NWSL in 2013.

Within a few months of her arrival, she had helped her team clinch a league and cup double, but was on the receiving end of an agonizing defeat to Wolfsburg in the UEFA Women’s Champions League final in London, in which she was substituted at halftime. Rapinoe extended her contract into the next season, but cut her deal short in January 2014 to return to the NWSL with Seattle.

Following in the footsteps of Lindsey Horan was Tobin Heath, who signed a six-month contract with PSG in January 2013. She scored five goals in 12 appearances, helping her club reach the UEFA Women’s Champions League. She played two matches the following season in the competition out of a total of ten matches, before leaving the club to join the NWSL and the Portland Thorns full-time.

Following the collapse of WUSA, a number of players in the mid-2000s sought employment in Europe. Joining Lorrie Fair at Lyon were Aly Wagner, Christie Welsh and Danielle Slaton, who all had a short spell with the club in 2005. “The players are crafty and technical, but the pace is slower in many ways,” Welsh said at the time. While Wagner added: “I definitely didn’t think I would ever be playing in Europe, but it was a once in a lifetime opportunity,”

Joining Fair, Wagner and Welsh in Lyon in 2005 was goalkeeper Hope Solo. Solo admitted in a feature with U.S. Soccer at the time that communicating with her defense was difficult at Lyon. She was still able to play seven matches, but could not help her team win the league title.

After the collapse of WUSA in 2003, Solo also had a stint in Sweden with Kopparbergs/Göteborg.