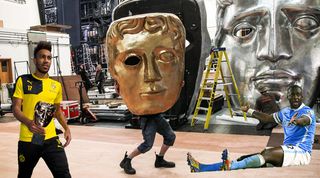 Manchester City midfielder Yaya Toure has cut his ties with the British Academy of Film and Television after failing to be nominated for a single category at the 2016 BAFTAs.

Friends of Toure report that he had expected to be nominated for a number of gongs, including best actor, best soundtrack and best attacking midfielder, and the snub had left him considering his future in England.

“Yaya seemed to have assumed that he’d win not just one BAFTA but several, even though, with all due respect to him, it was extremely unlikely he’d win even one,” a source close to the midfielder told FFT.

“We all tried to reason [with Yaya] but he turned on us and started asking aggressively whether we didn’t feel he could be a moving hour-long documentary or a light-hearted comedy romp.

“He claimed that he didn’t know what he had to do to get some recognition and none of us felt we could point out, however gently, that he may need to act, write, direct, produce, engineer the sound of, or source the costumes for, a feature film, documentary or TV series.

Fulham prepared to wait for Guardiola

“I doubt he’d had listened anyway because by that point Yaya was already Googling to see whether he’d been nominated for a Costa Book Award.”

Toure later backtracked somewhat, admitting that he was a fan of Eddie Redmayne, although he hinted heavily that he felt he could more impressively portray the emotional turmoil of one of the first people to undergo sex reassignment surgery.

The Manchester City man added that there was still a chance the BAFT could make things up to him if they baked him an enormous apology cake and got him Carey Mulligan’s phone number.

More features every day on FFT.com • Back of the Net