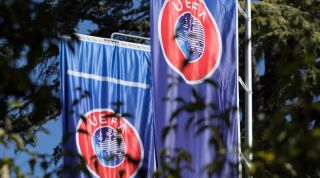 The launch of the UEFA Europa Conference League was confirmed by European football’s governing body at an Executive Committee meeting yesterday.

A new competition was mooted back in December 2018, but its oh-so-catchy name and format has only just been officially unveiled in Ljubljana.

Here’s the lowdown on a tournament that might have a big impact on the future of European football...

Why are we getting it?

The tournament’s stated aim is to broaden the number of nations and clubs represented in Europe’s top-tier competitions. Only 29% of UEFA’s constituent members are represented in the 2019/20 Champions League group stage, with 59.3% of those teams hailing from just five nations.

“Inclusive competition means more matches for more clubs and more associations,” says UEFA President Aleksander Ceferin. “There was a widespread demand by all clubs to increase their chances of participating more regularly in European competition.”

However, its critics allege that the Europa Conference League will actually help maintain elite nations’ stranglehold on Europe’s premier competition. Others have noted that the new three-tiered set-up might resemble the beginnings of a league structure similar to that of the long-rumoured European Super League.

Still not buying the UEFA Europa Conference League concept. All it does is offer the big five European leagues weight behind them filling up the Champions League for themselves.

Everyone else will end up playing in the lesser two leagues…— Joe Short (@_jshort) September 25, 2019

Is it replacing the Europa League?

How do you qualify?

Qualification is possible through domestic league and cup performance. Unlike the Champions League, qualification berths are weighted away from Europe’s elite nations. As it stands, as one of UEFA’s top-five-ranked nations by coefficient points, England would only have one available slot. That will likely be filled by a seventh-placed Premier League side, or the winners of the Carabao Cup, who would then have to win a play-off to qualify for the group stage.

Non-champion sides from nations below 15th in UEFA’s rankings (such as Rangers or Basel this season) would no longer be eligible for the Europa League, but go straight into the Europa Conference League.

When is it starting?

When are the games being played?

Matches will be played on Thursdays, with kick-offs at both 5:45pm and 8pm. That means the tournament, as it stands, will clash with Europa League fixtures.

Almost the same as the Champions League, basically. Eight groups of four teams, then a last 16, quarter-final, semi-final and final. The only difference is that there will also be a preliminary round before the last 16, between third-placed Europa League group stage sides and their second-placed Europa Conference League equivalents.

The 32-team format has been decided on from 2021 to 2024, but there are already suggestions the tournament might expand to 64 teams.