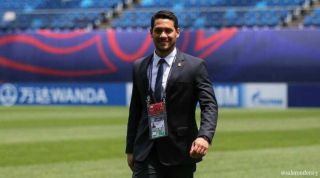 Guacaran, who also worked as a physiotherapist for the Venezuela U20 team and local side Deportivo Lara, was shot in the head as he left a pharmacy carrying some bags.

According to Venezuelan newspaper El Impulso, Guacaran was not spoken to and the assassin didn't steal any of his possessions before fleeing on a motorbike.

He wrote: "Such pain and helplessness to see again that life costs nothing in my country. Thanks for everything, Guaca, I'll always remember you with the happiness that you exuded. My condolences and deepest sympathies to your relatives."

Midfielder Tomas Rincon also took to social media to called for an end to the violence in Venezuela.

"Moved with this sad news, what helplessness and indignation. Once again crime takes away a great human being, I will always remember that friendly smile. God of great strength to his family. NO MORE VIOLENCE."

Their statement read: "From the family #Vinotinto we join the deep pain that the death of our brother and physiotherapist Jesus Alberto Guacarán Barrios occurred this Wednesday in Barquisimeto. Our most sincere words of condolence to his relatives. RIP."