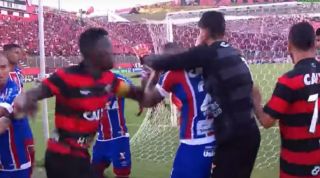 When a 50th-minute penalty from Vinicius (not the Real Madrid-bound one) cancelled out Denilson's opener at the Estadio Manoel Barradas, his celebration sparked a mass brawl that saw the first of five red cards dished out.

As the uproar took to the stands, two more players - one from each side - were shown straight reds.

And with 13 minutes of the fiery contest remaining, two more were sent down the tunnel – which forced the referee to end the game, as Law 3 dictates that “a match may not start or continue if either team has fewer than seven players”.

You couldn't make it up.