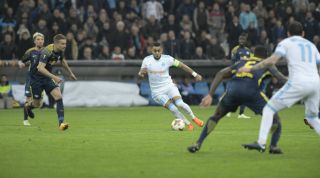 RB Leipzig had won the first leg 1-0 in Germany, meaning Marseille would need an inspired performance in front of their home fans.

Luckily for them, former West Ham playmaker Payet stepped up to the plate – but only after things got worse for the French side.

Leipzig took an early lead through former Galatasaray winger Bruma, but a Stefan Ilsanker own goal and Bouna Sarr's strike brought the tie to 2-2 on aggregate.

There was plenty more drama: in the 38th minute, Payet assisted a Florian Thauvin goal, only for Jean-Kevin Augustin to level matters 10 minutes after half-time.

With Leipzig heading through on away goals at that point, Payet stood tall and grabbed a decisive goal by weaving through the Bundesliga side's defence and lashing home into the top corner with the outside of his right boot.

Marseille capped a 5-2 victory (5-3 on aggregate) through Hiroki Sakai in injury time – but after the game, Marseille coach Rudi Garcia reserved his praise for "leader" Payet.

Garcia told beIN SPORTS: "We had two of our best players. Flo [Thauvin] scored, Dimitri was the playmaker.

"He shone, as in his play and while scoring. He set Flo up to score, he also plays the corner on the equaliser.

"To win 5-2 in the quarter-finals of a European competition, the team must be on top form. Everyone has been and Dimitri was a good leader."