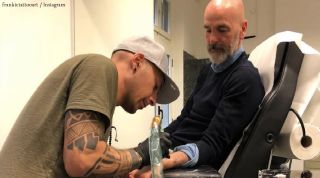 Central defender Astori – aged only 31 – passed away in his sleep on March 4 ahead of Fiorentina's planned Serie A fixture against Udinese.

Fiorentina full-back Cristiano Biraghi got a tattoo to remember his former team-mate earlier this week, which displayed a black ribbon and the lettering #DA13.

Now coach Pioli has been inked to commemorate Astori's life, as shown by a tattoo studio in Florence on Instagram.

Since Astori's death, Fiorentina have won six consecutive league matches and are just two away from breaking their club record for successive Serie A victories.

Pioli says their upturn in form is down to the team becoming more united team following Astori's tragic passing.

"He [Astori] always had a long-term vision, he was one of the first to believe in our new path, and he put in a lot of effort to help his team-mates develop," Pioli told RAI.

"We were playing good football even when Davide was with us, but we lacked consistency, which is also normal given the changes that we'd made.

"Now we are more of a team, more mature and the results are arriving. We're reaping the rewards of a very long but positive job."

As it stands, Fiorentina will qualify for the Europa League in seventh place.