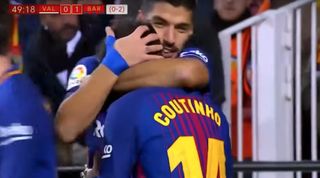 Coutinho opened the scoring for Barcelona in their 2-0 win over Valencia in the Copa del Rey semi-final second leg on Thursday night to secure a 3-0 aggregate victory.

The Brazil international came off the bench in the 49th minute to score on his fifth Barcelona appearance after making his £146m transfer from Liverpool in January.

Suarez surged up the left wing and powered past Ezequiel Garay before squaring the ball across to Coutinho, who slid in to apply the finish.

The relief was clear on Coutinho's face. He said post-match: "I feel happy to have scored my first goal for Barça and have helped the team get to the final. It's a special moment."