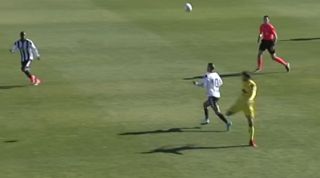 The 24-year-old Stoico single-handedly led the hosts' counter-attack from their own penalty area, nodding the ball over one midfielder before casually flicking it over another.

Once Stoico had left his two opponents for dead, he surged forward before aiming a beautiful strike into the top corner from outside the box.

In Saudi Arabia, Mark Clattenburg halts play due to calls for prayer