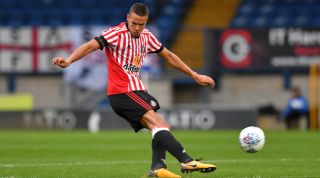 Vitesse looked prepared to give the England international a shot at redemption by handing him a trial. But on the morning he was supposed to be at the Eredivisie side's Papendal training base, the club revealed he'd been turned away.

Vitesse, who are renowned for taking Chelsea's younger players on loan, said on Twitter that Rodwell would not be having a trial after all, citing "organisational reasons".

"Because of organisational reasons, the trial of Jack Rodwell at #Vitesse will not happen," the Dutch club posted.

Sunderland have offered to rip up Rodwell's £70,000-a-week contract if he finds a new club, but the ex-England international would (naturally) prefer to have it paid up.

The 26-year-old has made three appearances for the Championship side this season, as part of a disastrous spell on Wearside. Last season he ended a record-breaking run of 39 games without tasting victory in the Premier League, appearing in Sunderland's 4-0 victory over Crystal Palace – when he came off at half-time.

In Saudi Arabia, Mark Clattenburg halts play due to calls for prayer

Watch: Lionel Messi is dominant even on Japanese gameshows