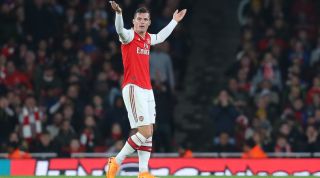 There’s no correct answer to the Granit Xhaka problem. The debate will happen anyway, fiercely as always, but it’s an argument which is impossible to win.

The Arsenal supporters treated their captain shabbily. When a reaction is that loud and that provocative, it was always likely to draw a response. However unpalatable Xhaka's reaction is deemed to be, nobody should claim to be surprised by it.

At the same time, however, Xhaka himself must surely have known that he wasn’t working from a position of strength, that he didn't have the footballing capital to retaliate, and that any show of petulance would only make things worse.

The question of who’s to blame seems secondary to what the incident, stripped of its specifics, says about football today. More specifically, what it means for the relationship between players and supporters.

An unfortunate irony is that as interest in the sport and its participants has increased, the ability to reach out and touch its texture has dramatically receded. Footballers don’t buy pints of milk from local shops anymore, neither do they give many interviews which reveal much about their true personality.

The result of that is an unrequited interest, in which the supporter has an almost insatiable appetite for anything relating to the player but few ways of satisfying their curiosity. Instead, they are left loyally following whatever Twitter or Instagram accounts are available, scrolling through the vanity in the hope that something semi-interesting will escape through the PR filter.

Just how starved the public is reveals itself on a regular basis. It’s telling, for instance, that a footballer need only prove that he isn’t a sociopath to be hailed a man of the people. Acts of basic human courtesy become great shows of ‘class’, such is the desire to feel something other than a hologram’s cold vacuum.

The other thing that happens – unintentionally, without anyone noticing – is that, over time, a footballer’s playing personality becomes who he is. Somehow, the way he tackles, passes and shoots is translated into something more than a technical skillset.

A forward who doesn’t square the ball at the right time is presumed to be a selfish person in real life. Maybe he steals the duvet from his wife in the morning or doesn’t replace the cereal when the box is empty. Perhaps the full-back who makes rash tackles also makes bad life choices? He’s the one likely to get married in Las Vegas or buy a third house sight unseen, not the dependable centre-half who never misses a header.

However that’s described, it does feel as if it’s complicit in these Xhaka-like incidents. Because supporters can never really know the player wearing their shirt, they need reassurance – they have to be placated with proof that those representing their club care in the same way. It's wilful denial, but it's part of the pantomime which holds the sport together.

It’s why, for example, travelling fans notice whether a player applauds the away end at full-time and, if the game has ended in defeat, react so furiously if he doesn’t. How many calls to 606 over the years have ended with that very same "and you know what else he never done" complaint? It’s also, unfortunately, why an entire generation of England players would be publicly shamed if they were caught smiling within 24 hours of a World Cup exit.

These little tells – tiny, micro-behaviours which are ascribed huge meaning – end up replacing the components of an actual personality and, because football is played on such a large, globally visible stage, the effects tend to be wildly disproportionate.

Duck out of a defensive wall and a player is a coward forever and in every department of his life. Fail to leave the pitch in a timely fashion after being substituted and, if the team needs a goal, the player obviously isn't attuned or invested in the common cause.

Which isn’t to say that all or any of this was at work with Granit Xhaka or that it had any effect on how that situation developed. But it does tenuously help to explain why seemingly banal acts are now so provocative and why these little moments so often flare into something far more substantial.