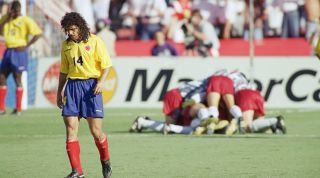 Forget the 'Hand of God'. For Colombians, Maradona's most famous mitt movement came seven years later, before their World Cup qualifier away to Argentina. Asked by a TV interviewer about Colombia's chances, Maradona referred to the two countries' footballing history. Argentina up here, he indicated with his right hand; Colombia down there. That was all viewers needed to know.

In the event, Colombia thrashed Argentina 5-0, and Maradona looked – not for the last time – like an unadulterated buffoon. Back in Colombia, all sense of proportion was lost. Crowds, the president among them, greeted the team's return. During a subsequent friendly, one fan even took a celebratory roast platter down to the dugout.

Colombia, the country's leading newspaper reported, was living a "collective feeling of belonging and nationalist ardour not seen since the war against Peru", fought 60 years earlier. Pele then took the bandwagon global, making Colombia favourites for the World Cup.

It was only once the competition got underway that Maradona's disdain was vindicated. Defeats to Romania (3-1) and the USA (2-1) meant that, despite a 2-0 victory over Roy Hodgson's Switzerland, Colombia finished bottom of Group A. As Brazil and Italy advanced to the final, it was clear a new footballing superpower had not emerged.

How did Colombia go from favourites to failures? The point is, they should never have been so fancied. "Up until the Argentina game, we were a team on the rise," argues Oscar Cortes, an unused squad member. "From then on, we went downhill." Colombia failed to win any of their three warm-up games against modest opposition.

The popular wisdom is that the players were so over-confident that their World Cup preparation consisted of beer and brothels. In fact, while public expectation boomed, the Colombia set-up was haunted by a realism bordering on defeatism.

Cortes says he "never heard any of the players say we were going to win the World Cup, or get to the final. At most, we could have got one or two rounds further, that would have been fair." Pacho Maturana, the coach, showed a disarming lack of confidence when he told a reporter: "For me, the important thing is to compete... to leave a mark, a footprint."

What the players, but not the media, could see was that the key figures were not at their peak. The ageing Carlos Valderrama was recovering from injury, the ever-erratic Tino Asprilla was exhausted after a long season at Parma, and Freddy Rincon, then of Palmeiras, was out of form. Other players had their own problems: two days before the US game, right-back Chonto Herrera found out his brother had died in a car crash. (Nor was Rene Higuita there, having been in prison for profiting from hostage mediation.)

In any case, this was not a squad built to endure long days in a team hotel. Slick passers on the pitch, the players combined less easily off it. Valderrama's uptight personality jarred with Asprilla's general clowning; then there was the reserved Rincon and a large clique from Atletico Nacional.

The lack of squad spirit was evident against Romania: Gheorghe Hagi and Florin Raducioiu were naively afforded space, goalkeeper Cordoba had a day to forget, and Colombia could not rally a comeback.

Death threats came, demanding that Barrabas Gomez, brother of Maturana's assistant Hernan Dario Gomez, should not play. Barrabas left the squad, but players say the impact of the threats lingered. In the circumstances, the defeat to the US – featuring Andres Escobar's own goal – was actually less remarkable than the efficient victory over Switzerland.

After Colombia were knocked out, coach Pacho Maturana told the players that they were welcome to stay in the US until tensions back home cooled down. Chonto Herrera suggested to Andres Escobar that they take up the offer and see a bit of the country. Escobar declined. After all, he said, in Medellin everybody loves us. He quickly found out how wrong he was.

Was Escobar killed for his own goal? Rumours have long said so, on the basis that the Cali and Medellin drug cartels had bet heavily on the outcome of the World Cup. The courts, in contrast, found that Escobar had been killed over what Colombians call "a skirt problem".

After approaching a girl in a nightclub, he was accosted by two men who insulted him, not just on account of his own goal, but also of ad campaigns he'd appeared in. As the argument continued, the men's driver stepped in and shot Escobar. This was the Medellin of the 1990s, where homicide represented the primary cause of death. But a driver taking the rap is never wholly convincing.

Surprisingly, in a country constantly raking over past cartel crimes, no new light has been shed on Escobar's murder. Perhaps there really was no order from the mafia hierarchy. Uncertain, people create their own versions of the truth: a novel released to coincide with the 15th anniversary of the killing featured a football commentator, who lost not just his savings but his voice at the moment the own goal went in. Shooting Escobar was the commentator's way of regaining the power of speech.

Whatever happened, there is little doubt that Escobar's life would not have been in danger had Colombia won in '94 – even an indignant mafioso boyfriend wouldn't shoot a hero. Instead, like Salvador Cabanas, Escobar most probably found that – in a bar, with tempers fraying – a footballer's aura does not offer much protection.