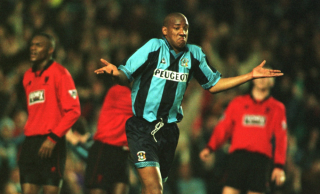 Football might be different in the future. Probably not in tone, because the same people will still be exerting the same self-interest, but perhaps in structure. The costs of the coronavirus pandemic are many and myriad, but – among those – it seems almost certain that the squads that reappear on the other side will have to be more efficient and achieve more with less.

With that in mind, whatever happened to the players who played multiple positions. In 2020, where are Gary Doherty, Dion Dublin and Ian Pearce?

Typically, those players were deployed in different roles as a result of crisis. Today, with the amount of money available to head coaches and the implied need for players to specialise from a very early age, there’s rarely the need to cram a square peg into a round hole.

But it’s interesting that such experimentation has become so rare – particularly as the difference between the various positions is arguably less than at any other point.

In fact, let’s clarify: it is the overlaps that are more common. Centre-halves and goalkeepers are expected to have an excellent touch and are desired to have the passing range of an old central-midfielder. Similarly, centre-forwards can no longer afford to exist solely in the penalty box and not only have to contribute to multiple phases of the game, but do so in a variety of ways.

Gary Lineker could only ever have played as a No.9 - despite what Johan Cruyff thought – but, conversely, Roberto Firmino might make a thoughtful deep-lying playmaker or a dangerous No.10.

The physical differences are less, too. Some players are tall, and some are short. That will always be the case. But as mobility and speed have become greater currencies, along with technique and skill, the pre-requisites around size and strength have been relaxed. You don’t necessarily need to be X to be a Y.

The ideal of a commanding centre-half is now Virgil van Dijk, not Steve Bruce, Colin Hendry or Terry Butcher. The deepest point of a midfield no longer has to be battle-scarred, either, and is now allowed to play and look like Luka Modric rather David Batty or Carlton Palmer.

Thirty years ago, if you were to look at a cluster of players on a training pitch – without numbers or bibs – then it would probably have been possible to know their positions just by the way they looked, how they ran, or how they received the ball. To a certain extent that can still be true, but it’s still fair to say that those giveaways have been superseded by an homogenised ideal.

Today, a footballer is more or less just a footballer, right up to the haircuts, the sleeve tattoos and the luminous boots.

Tactically, the game has also relaxed. It’s a forum for ideas and change in a way that it previously wasn’t; there has never been greater opportunity for flux between the positions. It’s not so long ago, for instance, that asking two wingers to swap flanks would have represented a major structural change. A right-footer on one side, a left-footer on the other. The English national team’s greatest point of contention during the 1990s and 2000 was predicated on their inability to conform to precisely that imperative.

Today, Gareth Southgate has half a dozen wide-forwards to select from and - still -  not a credible left-foot among them. But it’s the strongest part of his team and the specific potency which may take England back to the top of the game.

A weakness has become a strength, almost purely because the parameters of acceptability have been broadened. There isn’t the same need to conform to a narrow set of ideals.

So, given that all of these barriers have been removed, where are all the utility players? Not the generational oddities types like Ruud Gullit and Luis Enrique, who were just freakishly gifted and capable of contributing from any part of the pitch. No, the more mundane sort: the type of players who make a living through their seven-out-of-10 range and who prosper at hard-up clubs where specialisation and the heavy stocking of positions can often be a luxury.

Where did they go and why are they not more valued than ever before?