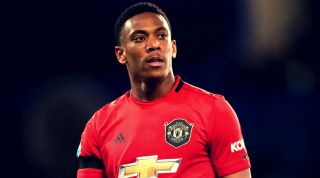 Among the positives for Manchester United on Monday night was the performance of Anthony Martial, who scored the first goal against Chelsea and showed an aggression with the ball which hasn’t always been his trademark.

Martial is a curious case. He’s 24 now, 25 at the end of this year, and this is his fifth season at United. Statistically, he’s been a disappointment since arriving from Ligue1. He’s reached double figures twice and almost certainly will for a third time in 2019-20, but that’s a fairly meagre return for someone of his abilities. Martial is tall and elegant, technical and languidly quick. He should be better than this.

It’s a discussion with an asterisk, because United have had their own, well-publicised issues. Weak at full-back, poorly defined in midfield and confused up front, the conditions haven’t been conducive to Martial’s best form or his further development. Clearly not. Nor has the rotating cast of managers done him many favours, with the bounce between philosophies and the many, many melodramas in between providing a further array of obstacles.

Perhaps part of the difficulty with Martial is that he hasn’t really been properly defined. Is he a centre-forward, or does he belong in one of those wide positions, slashing in-field and into the penalty box?

That confusion is actually part of Thierry Henry’s legacy. He roamed that area so well during his Arsenal career and was so dynamic in that specific, shallow-left part of the pitch, that it forever changed the way athletically gifted forwards were viewed. It created this perception that the two positions are interchangeable, that most forwards of his profile would be able to play both and that, if they weren’t, that was proof of their inferiority.

Given their nationality, lineage (Monaco) and style, it was difficult not to look at Martial play as a teenager and see Henry. What has followed, naturally, has been a disappointment.

All of the reasons above describe why his reputation has sagged. But maybe key amongst them is this sense that he exists within his talent. He’s not a forceful player. In fact, he seems reticent at times, shy in expressing himself and almost reluctant to become the player he could obviously be.

When, for instance, was the last time he truly terrorised an opponent? The last game in which he really knotted someone up and ran them ragged?

Has it ever happened?

More often, in the periods between his goals, Martial is characterised by caution. He receives the ball at a standstill, assesses his options, and then makes a decision about what do once he's in possession. Rarely does he surge into the play, or inject himself into it at pace. That's even true of counter-attacks, in which he isn't often particularly prominent. Marcus Rashford's reputation has been largely formed on the break, so too that of Daniel James. But Martial? He's so strangely subliminal.

To an extent, that probably does describe his team’s issues more than his own. But on the basis that it’s been a continuous problem across his nearly five years, he has to be at least partly responsible.

But that is also why Monday night was so heartening. There was an intent to Martial’s play. Stamford Bridge has been a good ground for him, he’s had plenty of success there before. Maybe that’s indicative of this being a confidence issue? Whatever it may be, against Chelsea he was forceful. He played in straight lines with pointed arrows and when the chance arrived to change the score, he barged in front of Andreas Christensen and left Willy Caballero helpless with his header.

It was startling in how unusual it was. But it was a reminder that underneath that flippant exterior and passive expression, there’s a very rare player to be rediscovered. Whatever else Manchester United manage to do over the next few years, extracting Anthony Martial from himself should be a priority. This should be him, all the time.

QUIZ Quiz! Can you name every Liverpool player to feature in a Champions League final?