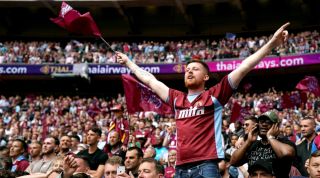 Not since Martin O’Neill led the club to the brink of Champions League qualification have Aston Villa fans felt so optimistic about the start of a new campaign – and with good reason. A 100% record in pre-season, capped by an emphatic 3-1 victory at RB Leipzig, follows a remarkably slick transfer window for a Villa side that – with boyhood fans as manager and captain – has reconnected with supporters following nearly a decade of stagnation.

In defence, Tyrone Mings and Bjorn Engels have the makings of an outstanding centre-back partnership, while Tom Heaton is the main reason Burnley survived last season. Further upfield, the signings of Douglas Luiz and Wesley have been described by in-the-know outsiders as major coups. Add to that a central midfield consisting of two potential future Big Six players in Jack Grealish and John McGinn, and there is little doubt that Villa will be one of the Premier League’s most entertaining sides this season.

Problem is, nobody yet knows at which end the goals are most likely to flow.

In the clamour to rebuff the lazy comparisons with Fulham’s spending in the summer of 2018, the majority of which was done on transfer deadline day, cheerful analysis of Villa’s prospects may have swung too far the other way. While it’s true that a policy of signing ‘experienced’ Premier League players tends to betray a scouting network that’s working off name recognition alone and leads to an unmotivated squad – shout out to Andre Schurrle – there is something mildly alarming about Villa’s faith in the quick adaptation of players from Club Brugge, Stade Reims, Kasimpasa and Brentford.

Similar questions can be asked of Villa’s bold playing style under Smith. Football fans’ collective preference for newly promoted clubs to follow the Bournemouth model has perhaps blinded us to the gaps and glitches that develop when moving between the Championship and Premier League. Or, in more concrete terms, maybe the obvious excitement of signing a 19-year-old Manchester City starlet has distracted Villa from the realisation that arguably their most defensively-minded midfielder next season (assuming Marvelous Nakamba is a backup option) will be said teenage wonderkid, who, when you actually look into it, was not at all renowned for his defensive qualities while being relegated with Girona last season.

For anyone assuming Villa’s urgent rise under Smith belays the need for pessimism, it's worth remembering that his tenure in B6 began with chaos. Ten wins on the spin through March and April was proof that Smith’s expansive attacking system – prioritising territorial dominance and elegant possession football – was not a call to anarchy, but it didn’t always look that way. A month after Smith’s appointment in October 2018, Villa drew 5-5 with Nottingham Forest – the second match of a 10-game run in which the Villans conceded 20 goals. Fanatical attacking football was quite the culture shock for Villa's players, 14 of whom have since left the club. Half of their new signings have not previously worked under Smith as they prepare for life in an unforgiving division.

That’s not to say Villa are necessarily in trouble. To confidently predict a year of turmoil for them would be unfair given Smith’s superb management of the club thus far, and the flawless work carried out by director of football Jesus Garcia Pitarch since his arrival two days before Smith’s in October. The club’s early recruitment this summer highlights a streamlined management structure that deserves cautious trust, particularly in an age of charlatan owners. The NSWE group haven’t put a foot wrong since purchasing a controlling 55% stake in the club in July 2018.

And yet on the eve of the new Premier League season, the spectre of that erratic autumn form is hard to shake. Aside from lacking a midfield destroyer, Villa’s full-backs are also a cause for concern. Replicating a possession-dominant system in the Premier League will require a watertight defensive structure, which is quite the ask from left-back Matt Targett (prone to switching off at Southampton) and right-back Frederic Guilbert (liable to getting caught ahead of the ball, hence his 21 yellow cards in 69 Ligue 1 games).

With quality elsewhere in Villa's side, they should – at very least – find themselves as the fourth-worst team in the division come May, although by all accounts the club are aiming considerably higher. The squad and manager are clearly talented, but after so many personnel changes and with a commitment to all-out attacking football, the only guarantee is goals – and lots of them.

Whatever happens this season, Villa will be a lot of fun to watch – for neutrals, at least.

Ranked! The 9 best signings in the Premier League this summer