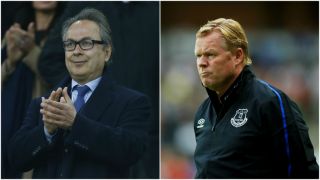 September 1, 2008 was a strange day. Aside from being the transfer deadline, it was also the moment when Manchester City's footballing life changed forever. In the morning, the Abu Dhabi Group completed their takeover and, for the rest of the day, City would throw proposals all over the continent in pursuit of a signature signing.

They would eventually land on Robinho, but the dynamic was of a lottery-winner giddily skipping down Bond Street: it didn't matter who they bought, just so long as they were seen shopping in the right part of town and leaving with something absurdly expensive.

Over the years, City would refine their approach with great success and, in 2016, they represent a model example of how to extract the most from generous investment and the virtues of process over pure procurement. Still, the memory of that September day lingers and, it seems, supporters of clubs who experience sudden surges in liquidity expect the same patterns to be followed.

"Where is our manic spree? What about our preposterously ill-suited luxury signing?"

In 2016, everyone in Premier League Land is filthy, filthy rich, but even within that context Everton are a special case. In late February of this year, steel and energy magnate Farhad Moshiri bought a 49.9% controlling stake in the club and turned them from one of the division's perennial have-nots to an entirely different proposition.

That's a little bit of a simplification because, admittedly, the days of Mickael Madar and John Oster are a long time ago, but Moshiri's $2bn net worth has the potential to make Everton a financial force. Given their generally thrifty existence over the past few decades, that represents substantial change.

But that is yet to be felt and, gradually, ripples of frustrations are appearing in the fanbase. With less than two weeks until the beginning of the new season, Ronald Koeman is yet to make any truly significant outfield additions and, with only Aston Villa's Idrissa Gueye close to joining, it hasn't been the summer that many were expecting or hoping for.

But perhaps that's an indication that Everton are well-placed to benefit from their new financial advantage. Having money is not a guarantee of progress, it's only an enabler – and for a club to move from one strata of the game to another, they need to understand how to actualise their opportunity.

Moshiri's wealth is significant enough to alter their future, but it is not so overwhelming as to offer a free pass to football's summit; he is neither Sheikh Mansour nor Roman Abramovich and he hasn't arrived on Merseyside with the normal sugar daddy swagger.

Consequently, while Everton can now afford to walk with a strut, they can't become reckless investors. Their reach has extended, but their movements must – for the sake of the team's integrity and club's long-term future – still be guided by the imperative of sustainability. That's clearly understood and, irritating though it may be for fans to watch their side in apparent stasis, there are already signs of evolution.

Koeman himself is emblematic of that. Both during his time at Feyenoord and Southampton, the Dutchman forged a reputation for team construction. Across those five years, he characterised himself as someone who could not only build stable sides from a revolving cast of components, but also as a disciplinarian whose success depended on his access to a particular type of professional. Malleable and talented, of course, but also impressionable and submissive.

Southampton's strength over the past two years has been their defensive organisation and the combined value of their parts – they were never reliant on star names or on individuals rising above the rest of the group. For that kind of manager to be a success, it's essential for his employer to bend its shape to him – most crucially in terms of the way it recruits.

Koeman's strengths were accentuated by the fertile academies at his last two clubs, but also by the talent identification programmes employed by each. Southampton's technical director Les Reed, for instance, is a notoriously studious recruiter and his supporting department is famously deep. Koeman was prosperous on the south coast because of his literal coaching abilities and admirable training ground acumen, but also because the footballing and technical departments were so smartly aligned.

Everton, to their credit, have recognised that. Their appointment of Steve Walsh as their new Director of Football is an indication that they're intent on extracting maximum value from their new investment and, neatly, signifies the beginning of a new era.

Walsh was one of the backbone figures in Leicester's recent title success and directly responsible for bringing Riyad Mahrez and N'Golo Kante to the East Midlands. More pertinently, however, his CV identifies him as someone who sees overlooked value: Danny Drinkwater, Danny Simpson and Marc Albrighton were all deemed unsuited to Premier League life before Walsh helped give them the opportunity to prove otherwise.

He may not be a King Midas figure and his transfer record at Leicester wasn't perfect, but his arrival still adds substance to Moshiri's stated intention to modernise that club's non-footballing practices.

With the Walsh/Koeman combination in place, they're equipped to combine short-term ambition with long-term logic and lasting returns, and to avoid the aimless splurging syndrome which might have befallen them. Rather than mimicking the early days of Abramovich or those first frantic hours of the Abu Dhabi Group, they appear to have skipped ahead to the more considered stage of the process and to the point at which strategy shapes spending, rather than the other way around.

Encouragingly, that's a common feature in almost all the English clubs which could be considered progressive. It's a philosophy which allowed Southampton to consolidate in the top flight, of course, but Tottenham are also indebted to their holistic infrastructure.

Years of misdirected spending have shaped the modern thinking at White Hart Lane and, rather than relying on London's attractiveness to foreign players or a comparatively high wage budget, the organisation's visible development has been accelerated by interdepartmental cohesion.

Eventually, the players will come to Goodison Park. Rather than being new names for the sake of novelty, though, they will be carefully selected pieces who have been carefully filtered to meet a criteria. Money may be the dominant currency in modern football, but its influence is always amplified when constrained by considered processes.

Rather than being a cause for concern, then, this short, initial delay is an indication that Everton are willing to check the trajectory before they load their cannons.