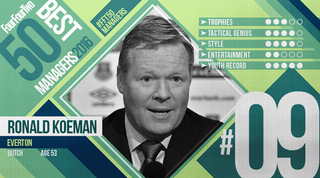 There was once a time when Ronald Koeman wasn’t entirely popular in England.

For years, he was best remembered as the man who’d finished off England’s chances of qualifying for the 1994 World Cup, the man who’d flipped home a sumptuous free-kick shortly after avoiding a red card for a blatant professional foul on David Platt in a crucial qualifier in Rotterdam.

“Linesman! Linesman! What sort of thing is happening here?” Graham Taylor famously exclaimed, his frustration so great that he was starting to lose the ability to construct basic sentences.

Twenty-three years on and Koeman has now started to be known more on these shores for the career he has forged in management, latterly in two impressive seasons with Southampton. When Everton were looking for a new boss this summer, Toffees fans didn’t take much convincing that Koeman was the right man for the job.

“He was our No.1 target from the moment we set out to appoint a new manager,” Everton chairman Bill Kenwright said. “Ronald has such a strong track record in the game, instantly commanding respect for what he achieved as a player and for his qualities and accomplishments as a manager.”

Koeman’s playing career suggested that he probably would become a good manager one day. A fine player with supreme technical ability, he helped PSV Eindhoven become champions of Europe for the first time in 1988, the same year in which he helped the Dutch national team win their first major trophy. Then came his brilliant Wembley winner as Barcelona won their first European Cup in 1992.

Not only that, but Koeman was a leader on the field, and someone who’d worked under both Rinus Michels and Johan Cruyff. Put simply, he’d learned from the best.

“He had a very good view of the game, tactically,” recalled Tonny Bruins Slot, who was Cruyff’s assistant at Barcelona and later became Koeman’s assistant at five clubs. “He was born into a football family so, as a baby, he was eating football.”

Someone probably should have stopped him doing that, but luckily it did him no harm.

It starts with Cruyff

Koeman’s room-mate at Barcelona was a certain Pep Guardiola. “Cruyff was a very big influence on Koeman and Guardiola,” Bruins Slot said. “They have taken the DNA of Cruyff, his idea of playing and training.”

Koeman started out as an assistant himself, first to Guus Hiddink with the Dutch national team, then to Louis van Gaal with Barcelona at a time when Jose Mourinho was also on the backroom staff.

His first move into management came at Vitesse Arnhem, quickly ascending to become Ajax boss. Things started well but later unravelled, particularly when Van Gaal arrived as director of football and started to interfere. The pair fell out, not helped by Van Gaal’s decision to sell Zlatan Ibrahimovic. “I liked Koeman,” Ibrahimovic later said. “Van Gaal was a pompous arse.”

Koeman moved on to Benfica, then won the Eredivisie with PSV, adding to the two titles he had claimed with Ajax. He joined Valencia, won the Copa del Rey in 2008 but was later sacked. “I don’t know if I have the squad behind me, but I reckon four or five of them are on my side,” he mused not long before his exit.

Soon Koeman returned to his homeland to complete his tour of the Netherlands’ big four, taking charge of AZ and Feyenoord. When Southampton were searching for a new manager after the departure of Mauricio Pochettino to Tottenham in 2014, they plumped for Koeman – a decision that wasn’t welcomed universally at the time.

It was a difficult moment to take over at St Mary’s – a host of key players were departing, yet Koeman still had to find a way to somehow repeat the eighth-placed finish that Pochettino had delivered in his final season on the south coast.

Recruitment was vital. Player sales meant Koeman had money to spend, but so did Andre Villas-Boas at Spurs after Gareth Bale’s exit to Real Madrid, and look how that went. Koeman bought wisely, bringing in Graziano Pelle, Sadio Mane and Dusan Tadic – a front three that would help Southampton not just match Pochettino’s best finish at St Mary’s but improve on it, to seventh in 2014/15 and sixth in the 2015/16, earning qualification for Europe two seasons running.

Assisted by his older brother Erwin, who has followed him to Everton, Koeman succeeded with Southampton while playing an attractive brand of football. His presence instilled both calm and confidence in his players, and his tactics were astute. Concerned that the modern-day footballer spends more time on his smart phone than talking to his team-mates, he introduced communication sessions to training.

Unusually, he’s a manager with his own Twitter account too, even if surprisingly enthusiastic tweets of ‘Matchday!’ alongside a picture of his massive smiling face have a whiff of the PR team about them.

Koeman did so well at Southampton that some, many Saints fans included, were surprised that he opted to depart for a club who finished five places below them last season. You’d imagine other offers might have come his way soon enough.

But Everton look willing to invest substantially under new owner Farhad Moshiri and Koeman no doubt believes that ultimately he can take the Toffees further than he could have taken Southampton.

It’s a move that suggests a certain confidence in his own managerial abilities – a confidence that looks justified right now.