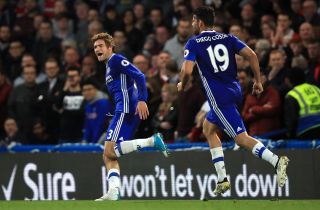 Marcos Alonso trudged up and down the touchline in the winter gloom, but the call never came.Â Bolton Wanderers were losing 5-4 at Peterborough, their defence one of the worst in the second tier, but the SpaniardÂ couldn'tÂ get a kick.

Alonso remained an unused substitute once more. His career had shown early promise in the youth system at Real Madrid, but it lookedÂ set to go unfulfilled. His move to England had gone badly wrong.

That was only four seasons ago. It must have seemedÂ a lifetime ago for Alonso at Stamford Bridge on Monday night, as he rifled home for Chelsea against Middlesbrough, to take them to the verge of the Premier League title. He may not be one of the Blues' biggest names, but he has undoubtedlyÂ proved to be one of their most important this season.

Eyebrows were raised in some quartersÂ when Chelsea spent ÂŁ24m to sign Alonso from Fiorentina just before the summer transfer deadline. The Blues had signed expensive left-backs before - Baba Rahman for an initial ÂŁ14m a year earlier,Â Filipe Luis for ÂŁ13.5m the year before that. Neither impressed and they were on their way again within one season - Luis back to Atletico Madrid, Rahman to Schalke on loan. Rahman had made only 11 league starts for Chelsea, Luis just nine.

Alonso started as understudy to Cesar Azpilicueta, just as his two predecessors had done. But his ascent to his current status has been about two turning points.

The goal that changed a career

The Spaniard had started only eight league games in his first two seasons at Bolton, as the Trotters dropped out of the Premier League - kept out of the side byÂ the ageing Paul Robinson, then the journeyman Sam Ricketts. He'd started only four games again by the halfway mark of their first campaign in the Championship - sometimes not even making the bench.

Alonso had looked vulnerable defensively, easily knocked off the ball and short of confidence in an attacking side that left their full-backs exposed. In a cup defeatÂ at Burnley early in his time at the club, his woes were such thatÂ he struggled even with the basics of taking a throw-in â€“Â Alonso was pulled up more than once for foul throws that night, as he looked helplessly ill at ease with his surroundings.

But then everything changed. AÂ week after that demoralising dayÂ at London Road, in December 2012,Â Alonso was given the nod from the start at home to Birmingham. Within half an hour he'd scored. For the rest of the season, he started every game he was available for, and played surprisingly well.Â The left-back who couldn't defend had become the best attacking left-back outside the Premier League, marauding forward at every opportunity. All he'd needed was a bit of confidence. Despite barely featuring before Christmas, fans voted him player of the season in a local newspaper poll.

Out of contract that summer, had he not produced that six months of form, who knows where he would have ended up? From looking likelyÂ to be released, Alonso was now playing so well that Bolton were desperate to keep him - but couldn't.Fiorentina had taken note of his form, and decided to take a chance on him.

Alonso initiallyÂ featured rarely for La Viola - he went out on loan to Sunderland, who attempted to sign him permanently, offering ÂŁ2m plus out-of-favour defender Modibo Diakite. The Black Cats seemed confident of coming to an agreement but Fiorentina said no, handing Alonso more playing time and allowing him to flourish.

Alonso had arrived at Chelsea, but the question remained: was he really good enough for them? Maybe he would have been another BabaÂ Rahman, another Filipe Luis... if it hadn't been for one result - Arsenal 3-0 Chelsea.

Not only was it the pivotal game of Chelsea's season, it was also the pivotal game of Alonso's season. He'd made his debut as a sub that day, with Antonio Conte's men already three goals down. When Conte opted for radical change in their next game at home to Hull, employing three at the back for the first time at his new club, Alonso was in - perhaps sooner than most expected.

Even better, he was playing at left-wing-back,Â a roleÂ far more suited to his attacking style than the left-back positionÂ he'd beenÂ utilised in at Bolton. The Spaniard thrived, Chelsea won 13 in a row and within weeks Alonso was an established member of Conte's first team.

It's hard to see how that switch to three at the back could have worked quite so well without Alonso's presence, and his impressive form. The Blues simply don't have many other natural options to play that role. When illness ruled Alonso out of the recent match at Manchester United â€“Â the only time he's missed a league game since his debut â€“Â Azpilicueta had to push forward to that position. Chelsea lost for only the third time in 27 matches.

Against Middlesbrough, it was clear why the wing-back role has got the best out of Alonso. The visitors attacked rarely - they had only two shots all game - and Alonso didn't have to do much defending at all.

It allowed him to bomb forward at will, to such extent that Chelsea's formation often looked less like 3-4-2-1 and more like 3-2-2-3, with Alonso and Victor Moses virtually level with lone striker Diego Costa whenÂ the Blues had the ball in central midfield.

That allowed Cesc Fabregas & Co. to direct numerous diagonal balls over the the Middlesbrough defence and into Alonso's path - a large proportion of the 33 passes he received during the game were in the final third.Â Within two minutes of kick-off, the diagonal ball tactic resulted in Alonso getting in behind and seeing his effort turned against the bar by Brad Guzan.

Just after the half hour mark, Middlesbrough sat so deep that it allowed one of Chelsea's three central defenders, Azpilicueta, to advance virtually to the penalty area and clip another diagonal ball over the top for Alonso to score. The wing-back could and probably should have scored again in the second half, firing wide when bearing down on goal.Â In total he had four shots duringÂ the match, more than any other player and twice as many as the entire Middlesbrough team.

He may not have been man of the match - that went to Fabregas - but the hug Alonso received from Conte at the end told the story of just what his manager thinks of him.Â Even if most of the plaudits go to Eden Hazard, N'Golo Kante et al, the stats show that no oneÂ has beenÂ more important to Chelsea's chances of victory this season -Â and their chances of winning the title -Â than Alonso.Â