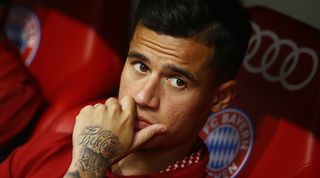 If it wasn’t for the grey hair, Andre Cury could be mistaken for one of Neymar’s parças – as the Brazilian forward’s friends became known back in his homeland. Cury could be seen everywhere – sharing a poker table, partying alongside the 25-year-old ace and taking the same private jet.

But he’s never been an ordinary pal: he’s the Barcelona board’s representative in Brazil, and in order to please Neymar and avoid his exit to PSG, Cury had to fasten his seatbelt and board a flight to Heathrow Airport on July 24.

Cury travelled from Barcelona to London to meet agents Kia Joorabchian and Giuliano Bertolucci, and discuss Philippe Coutinho’s move from Anfield to the Camp Nou. The trio shook hands in one of Joorabchian’s restaurants and agreed the terms of the deal that same day.

Since that afternoon, Liverpool have proved the main obstacle for the transfer, reiterating more than once that Coutinho is not for sale.

Cury is family for Bertolucci, though – they’ve known each other for a long time. Barça’s man for South American affairs had his comrade’s word on Coutinho’s decision, and headed straight to the Catalans’ pre-season tour in the United States in a desperate move to change Neymar’s mind and deter PSG from paying the buy-out clause.

It didn’t work out that way, of course, and the French giants announced a five-year deal with the Brazilian striker for a world record €222m.

But Coutinho’s agreement remained on the table – as did his desire to move back to Barcelona... only this time to the biggest side in town. The 25-year-old is no stranger to the Catalan capital, having lived there while on loan at Espanyol from Inter Milan in 2012, before eventually arriving at Liverpool for €13m the following season.

FFT have learned from sources close to the midfielder that he has already told Jurgen Klopp he wants the move to Barcelona to go through. Liverpool’s worst nightmare has finally become very real.

Senior Anfield officials have feared that Coutinho’s behaviour wouldn’t be the same ever since he left his former Argentine agent Gustavo Arribas to work with Joorabchian and Bertolucci in 2015.

The duo are responsible for most of the deals involving Brazilian footballers to the Premier League – Watford’s €12m striker Richarlison is the newest they’ve overseen. It shouldn’t come as a shock, then, that after four-and-a-half seasons at Anfield, no trophies and doubts about the Reds’ chances of fighting for the title this season, Coutinho sees his future in blue and red.

Despite his desire to move to Barcelona, however, he’s assured Liverpool that his attitude won’t change, and going to the war against the club is not an option. Neither is handing in an official transfer request.

Yet sources have told FFT that Coutinho’s agent Bertolucci is already in Barcelona waiting for the deal to go through, and a delegation of club directors is expected to fly to Liverpool.

While he’s there, Bertolucci also hopes to negotiate a move for former Tottenham midfielder Paulinho to join Barça from Guangzhou Evergrande, although it seems more likely that move will happen in the winter transfer window. Bertolucci’s partner Sam Kohansal recently returned from China after meeting the Brazilian midfielder.

The pair are confident that Liverpool will soften their stance on Coutinho before much longer, having asked Barcelona to raise their offer after the refusal of an €80m first bid. The Spanish side are expected to lodge a new bid of around €120m to end the saga and reunite Coutinho with Suarez.

Brazil coach Tite has always admired the midfielder, and encouraged his transfer to the Camp Nou in a recent interview with Diario Sport.

“I don't want to be pretentious and give an opinion on Barcelona, but who wouldn't want a player like Coutinho? That magic, that capacity to invent and create something, that change of rhythm, the way he builds play – it's crucial for any side,” he said.

"Just to be clear, I'm talking hypothetically. There's Sergio (Busquets) and two creative midfielders, (Ivan) Rakitic and (Andres) Iniesta, who are the thinkers of the team. Coutinho could play that role. He is the ideal player for Barça.”

The Brazilian boss’s opinion has a strong influence on Coutinho’s future – the midfielder was never a Seleção regular before his arrival and had a reputation of being a club player, rather than a national team one.

Coutinho signed a new five-year deal without a release clause in January, but it doesn’t appear to have been enough for Liverpool to keep him for more than seven months.

The 25-year-old didn't feature in his team’s final pre-season game against Athletic Bilbao due to a back problem, and could miss Saturday’s Premier League opener against Watford after receiving treatment.

Whether he’ll still be a Red by then, though, is even more uncertain.