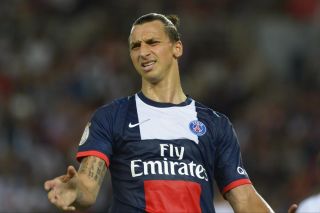 The pressure is slowly but surely beginning to pile onto Paris Saint-Germain.

On Sunday night, Laurent Blanc's side could only muster a 1-1 draw against Ajaccio at the Parc des Princes. It was an incredible game that saw Benoît Pedretti give the visitors a shock lead in the ninth minute before Edinson Cavani netted his debut goal for PSG in stunning fashion late on to end the contest on level terms.

Ajaccio were the only club to keep a clean sheet in both of their Ligue 1 games against PSG last season. Goalkeeper Guillermo Ochoa played in both of those matches and he proved imperative in defence once more as he made no less than 12 saves to heroically deny PSG all three points.

Ajaccio coach Fabrizio Ravanelli described Ochoa as "extraordinary" against les Parisiens. And he was not wrong.

Still, when one considers the statistics, it is a wonder that the home side did not win.

PSG enjoyed 77% possession and took 39 shots in total to Ajaccio's one. Yet they could not win. And after drawing their opening game of the season 1-1 away to Montpellier, Blanc's side now sit in 13th place in the league table with two points from two matches.

Lyon, Monaco, Marseille and Saint-Etienne, on the other hand, all have a 100% record in Ligue 1, with six points. While all of these clubs, perhaps barring the latter, could certainly push PSG for the title this term, the team that possess the economic funds to harbour serious hopes of prizing the trophy away from PSG this term is Monaco.

The Principality club earned promotion back into France's top flight as champions of Ligue 2 in May and Monaco's Russian billionaire owner, Dmitry Rybolovlev, has splashed the cash this summer in a bid to rival the champions at the top of the table.

No less than 12 players arrived at the club during this time including £50m signing Radamel Falcao from Atlético Madrid and £60m duo James Rodríguez and João Moutinho from Porto. Other big names to join the ambitious outfit included Eric Abidal, Jérémy Toulalan and Ricardo Carvalho.

The aim of such lavish spending is simple: Monaco want to take on PSG and try and win Ligue 1. At the very least, Claudio Ranieri's side will expect nothing less than to finish in the Champions League places.

The latter ambition is one that can realistically be achieved this season. The former will be harder to do - perhaps only because this is Monaco's first season back in the top flight with a host of new players that need time to integrate.

Yet that doesn't mean it's not possible. Ligue 1 can be highly unpredictable at times and Monaco are a club with money, history and highly talented players - all of which puts them in good stead to mount a challenge to PSG's crown this term.

PSG will be wary of this. Even with the addition of Cavani - who signed for the capital club in a French transfer record fee of €64m in July - Blanc knows that it will not be easy to retain their title. PSG will have continue to evolve and improve in order to match and outdo those around them.

Already that is becoming clear. Monaco broke down a defensively stalwart Bordeaux side in their opener to win 2-0. They then thrashed 10-man Montpellier 4-1 at the Stade Louis II this weekend thanks to a hat-trick from Emmanuel Rivière.

And Monaco are not just the only club that pose a threat to PSG's title ambitions. Seven-time French champions, Lyon, opened up the new campaign with a 4-0 thumping of Nice before disposing of Sochaux 3-1 on Friday night.

Similarly, last season's runners-up Marseille got a 3-1 victory in their first match against newly-promoted Guingamp before defeating Evian 2-0.

While they did not score quite as many goals in their first two games as Lyon and Marseille, Saint-Etienne also accrued six points from two games after 1-0 victories over Ajaccio and Guingamp.

These early results show how well these clubs have strengthened over the past few months. Marseille used the domestic market to bring in players such as Dimitri Payet, Saber Khlifa, Benjamin Mendy and Gianelli Imbula. Payet has already scored three goals in two league games for his new club.

Lyon, meanwhile, made a few shrewd signings and successfully held onto key players such as Clément Grenier and Maxime Gonalons. 22-year-old Grenier already has one goal and two assists to his name in the league this campaign.

The progression of PSG's main title contenders will not have gone unnoticed at the Parc des Princes. Indeed, Lyon, Marseille and Monaco's summer transfer business will have simply added to the pressure felt by the defending champions this season.

Blanc knows his team will have to retain the title this term - something which no club has achieved since Lyon in 2008. With the core of the 2012/13 title winning team largely in tact, they are also expected to go further in the Champions League this time around.

But with a new manager at the helm and with sporting director Leonardo now gone, PSG know they have to start winning - and quickly.

So far that has not happened yet.

"We were hoping not to fall too far behind our main rivals and this match was really disappointing because we deserved to win it," Blanc said following PSG's 1-1 draw against Ajaccio.

And while PSG's results are hardly anything to worry about at this early point in the campaign - the team drew their first three matches under Carlo Ancelotti last season before winning the league - slowly but surely the pressure is starting to pile onto the capital club.