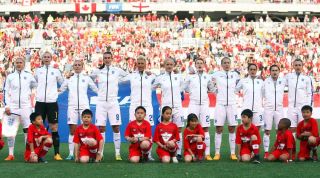 Here, we present a Group F featuring England, the French star they call 'Ziza' and a player whose piledriver pegged back the Three Lionesses in 2011...

Strengths: France won all 10 of their qualifying matches, scoring 54 goals and conceding just three, which ought to give you an impression of their credentials. Les Bleues were semi-finalists in 2011 and the core of that young side is now four years more experienced. Having won the U17 World Cup in 2012, the future looks bright too. The team is strong all over the pitch; 23-year-old captain and centre-back Wendie Renard has twice won the Women’s Champions League and has nine Division 1 Feminine titles with her club Lyon.

In Louisa Necib, France have one of the finest creative talents in the tournament, as her 'Ziza' nickname suggests. Necib is regarded as one of the most technically gifted female footballers on the planet and she has the potential to be one of the stars of this World Cup. She plays from the left of coach Philippe Bergeroo’s 4-3-3 formation, which is spearheaded by Gaetane Thiney. Thiney racked up 13 goals in qualifying, a total unsurpassed by any other European player.

Weaknesses: While France’s reputation on the international scene is growing, they come into the tournament with something of a bridesmaids tag. They finished fourth in the 2011 World Cup and the 2012 Olympic Games, and were eliminated from Euro 2013 at the quarter-final stage by Denmark. They don’t have the belief that a history of success has engendered in other tournament favourites like the USA and Germany.

Expectations: France are a team currently looking to push into the ‘contenders’ bracket. A place on the podium would represent progress.

Did you know? Manager Bergeroo has had global success in the men's game as player and manager: he was part of France’s Euro 84-winning squad and was goalkeeping coach for the 1998 World Cup winners.

Verdict: France ought to qualify from Group E, but a quarter-final exit is quite possible.

Strengths: England have plenty of pace and power, with Eni Aluko and Toni Duggan providing a nice combination of both traits up front. They are ably supported by midfield runners like Arsenal duo Jordan Nobbs (who can and will shoot from pretty much anywhere) and Lianne Sanderson. England have built some momentum, with quarter-final appearances in the 2007 and 2011 World Cups sandwiching a final at Euro 2009.

However, at Euro 2013, Hope Powell’s reign ended in acrimony. Key players voluntarily exiled themselves from international duty and a squad sapped of morale limped out in the group phase without winning a match. New manager Mark Sampson has inspired the likes of Sanderson and Chelsea's Katie Chapman to rejoin the fold, and the squad is certainly more united than it was two years ago. In the likes of Alex Scott, Fara Williams, Siobhan Chamberlain, Casey Stoney and Chapman, there is plenty of experience in the camp as well.

Weaknesses: Twenty-two of the 23 players in Sampson’s squad play in England where the game, though professionalising rapidly, is still essentially a semi-professional concern. England have a core of excellent players, but with Kelly Smith now retired, they don’t have anyone of the quality of Necib, Marta, Wambach or Sasic.

Expectations: England will expect to get out of the group. Any improvement on their current tournament best of the quarter-finals, a stage they have reached three times now, will be considered a good showing.

Did you know? England have yet to beat their German counterparts in 20 attempts.

Verdict: A thoroughly English exit at the quarter-final stage. Possibly on penalties. So many years of hurt!

Strengths: Creative midfielder Yoreli Rincón is the jewel in Colombia’s crown, pulling the strings expertly behind striker Lady Andrade. Rincón was controversially dropped at the 2012 Olympics after the coach criticised her fitness, and Colombia went on to lose all three of their group games. With the 21-year-old firmly reinstated, Colombia finished second in the 2014 Copa América Femenina, illustrating their recent improvement on the international stage.

Colombia have a solid spine, with goalkeeper Sandra Sepulveda, centre-half Nataly Arias, central midfielder Diana Ospina and striker Andrade forming the core of the team alongside Rincón. All of these players are seasoned internationals. Colombia have a solid defensive organisation and a carry a varied goal threat - their 12 Copa América goals were shared between eight players last year.

Weaknesses: Last year’s Copa América will have served them well, but there is still a lack of genuine tournament pedigree in the squad. Colombia didn't win a game at the 2011 World Cup or the 2012 Olympics. In 12 matches against continental rivals Brazil and Argentina, they have only won once. They tend to come up short against the big guns.

Expectations: Colombia are participating in only their second World Cup, having not won a game in their 2011 debut tournament. Publicly they will say their aim is to qualify from the group, but realistically a first-ever World Cup win is a more likely target.

Did you know? Andrade was sent off during a 2012 Olympics match against USA for punching Abby Wambach in the eye.

Verdict: A group stage exit, but it certainly shouldn't be pointless.

Strengths: Monica Ocampo is El Tricolor’s chief conductor, and those who watched the 2011 World Cup may recall her fulminating 35-yard drive to rescue a draw against England. Mexican women’s football is still in a developmental stage, however, with no national league in place. Coach Leonardo Cuéllar has been in charge of the national side for 14 years now, and has overseen great progress in the physical and tactical side of women’s football in Mexico.

Mexico has traditionally been a team drafted from American-Mexican girls, so much so that English has often been the agreed language of the squad. However, the majority of this team are now first-generation Mexicans raised in the country, which has removed some of the tension that used to permeate the squad. As such, a more peaceful co-existence has formed.

Weaknesses: Mexico are on an upward trajectory, but are likely to be short of the overall quality required to make an impression on this tournament. Five of the players in Cuéllar’s squad are currently clubless. With the roster drawn largely from the American leagues, Mexico have struggled to establish their own style.

Expectations: Having narrowly qualified, they will be happy enough to be on the plane to Canada. In truth, their aim will be to finish with some points on the board.

Did you know? Manager Cuéllar has 41 caps for the men’s Mexican national team and represented his country at the 1978 World Cup.