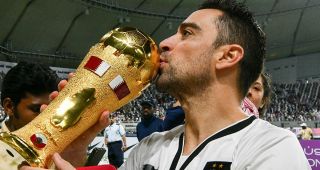 The 37-year-old, fresh from winning the Emir of Qatar and Qatar Crown Prince Cup with Al Sadd, was awarded the giant cheque by Doha Bank on Monday.

Nine months after opening an account with the bank, the Spaniard has won 1 million Qatar riyals (€225,000) in their annual lottery.

Reacting to the prize that definitely isn't a marketing ploy with quotes that are definitely from him, the midfielder said: “Winning the cash prize was an unexpected but welcome surprise.

"I'd opened my account with Doha Bank on December 5, 2016, as I had taken interest in the Al Dana programme after hearing about how Doha Bank encourages their customers to save money, and get a chance to become millionaires as well as the opportunity to win other cash prizes.

"I started to invest with the Al Dana Savings programme, aiming to win the QAR 1 million."

The former Spain captain is believed to trouser around €10 million per year with Al Sadd, but he's unlikely to be grumbling at this latest payday.