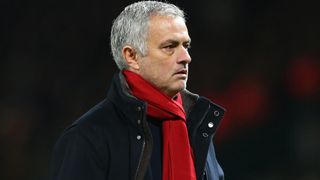 When news broke on Thursday of Jose Mourinho signing a new deal, Manchester United supporters weren't the only ones punching the air and shouting "back of the net!"

Bosses at the snazzy Lowry Hotel in Manchester were surely rejoicing at the prospect of Mourinho securing himself a second contract.

Mourinho's decision to live in the hotel since joining United has been well-documented, with some claiming it to be evidence of an apparent lack of long-term interest in staying at the club.

But Mourinho put his decision to not buy a house down to his "laziness" and, presuming he doesn't irritate reception staff, Lowry bosses will no doubt be hopeful he doesn't suddenly become proactive on that front.

After all, the Portuguese coach – whose new deal could keep him at United until 2021 – lives in a luxury suite that costs a pretty penny to call home.

The numbers behind Mourinho's Lowry stay

- Mourinho pays an estimated £816-a-night for one of the riverside suites.

- That would be enough to pay Paul Pogba's reported £200,000-a-week wages for nearly seven-and-a-half weeks.

- It would take Mourinho 40 years to rack up a similar bill at the £102-a-night Hilton nearby.

What does he get for his money?

Staying in the Lowry's riverside suites guarantees a certain standard of luxury.

Mourinho has use of a walk-in wardrobe for all of his tracksuits and matchday coats, an in-room bar, kitchenette and an ensuite bathroom that glistens like an enormous Glacier Mint.

He also gets two – because one isn't enough – smart TVs, high-speed internet and "individually" controlled air-conditioning, hopefully preventing him from getting hot under the collar and becoming Manchester's maddest man.

On top of all that, there's never any graffiti in the hotel. Rather, each Riverside suite is inspired by the artwork of "internationally acclaimed" Alan Rankle, who obviously has talent.

And down in the restaurant, Mourinho can get kitchen staff to rustle up beetroot buckwheat risotto with smoked feta and sun choke crisps, a staple of every diet.