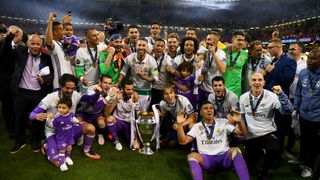 A detailed study on the financial landscape of European football was released by UEFA on Tuesday.

The governing body broke down the statistics behind the previous transfer window, detailing the evolution of fees and the league with the lowest net spend.

Here, we take a look at the major headlines from the report.

- The previous transfer window featured six of the top 20 transfer fees of all time and 10 reported transfers of €50million or more. Neymar's €222m switch from Barcelona to Paris Saint-Germain was the biggest.

- The most significant jump in high-value transfers is visible in the €50m+ category, where the number of moves are twice as high as in the previous close-season window.

- The Premier League was both the biggest spender and the top earner, though the league's net spend was -€772m. By contrast, Portugal had the greatest net result of +€231m.

- Manchester United generated the greatest revenue of all clubs across Europe for the financial year of 2016 at €689m, more than Barcelona and Real Madrid (€620m).

- For the first time on record, the average wage bill of Premier League clubs (€153.9m) was more than double that of the next highest-paying league, the Bundesliga (€75.3m).

- The highest wage bill in European football belongs to Barcelona (€372m) and amounts to 60 per cent of their total revenue. It is also 5.2 times the LaLiga average.

- Manchester City (€362m) overtook Madrid (€334m) as having the highest value of players on their balance sheet, although the original transfer cost of the latter's squad (€754m) remained the highest.

Transfers relate to the previous window in 2017, while other figures pertain to the financial year of 2016.